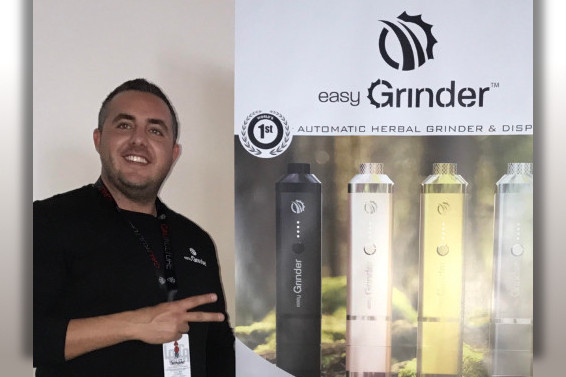 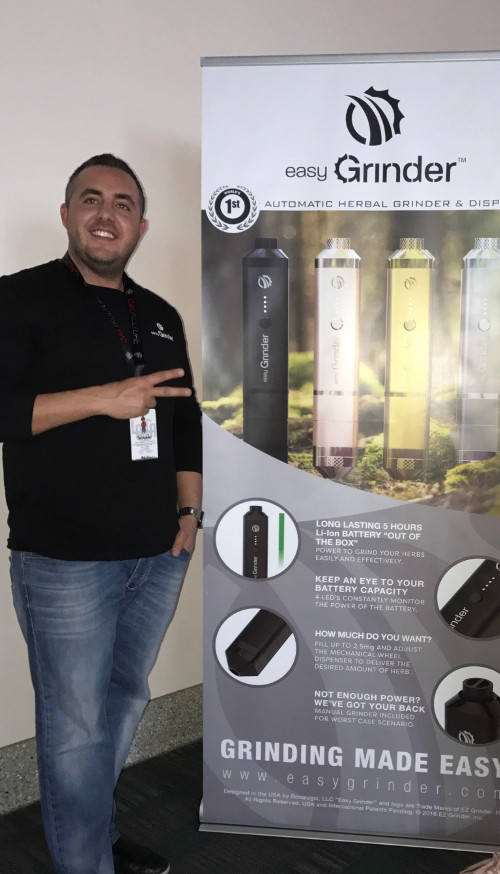 Nothing in this world worth having is easy – unless you’re talking about the Easy Grinder, the world’s first automatic herb grinder & dispenser.

The revolutionary device looks to be straight out of a high-tech lab, but its operation and function are as user-friendly as they are effective. Simply push a button on this battery-powered device and it evenly mills your herbs in as little as three seconds – the longer you press the button, the finer your herbs become.

The Easy Grinder was nine months in development because the the makers wanted to absolutely sure they had the product functioning perfectly before it was released to the public. While the initial designs were sketched out by CEO Yaniv Nahon, engineers in China perfected the look and operation.

Easy Grinder‘s magnetic slide swing tip makes it easy for users to quickly load, grind and dispense herb, but it also provides a way to store their stash. When the battery is removed, the closed chamber serves as compact transportable storage for up to 2.5 grams of herb.

Yet another bonus for users – at the bottom of the ceramic coated non-stick blades is a “kief collector” that, after four or five grinds, fills up with the smokable “caviar” of the flower.

The rechargeable Li-Ion battery can last five hours on a single charge or enough for 300 grinds, and with the LED battery display on the front of the unit, you’ll know when it’s time to plug in to the included USB charging cable. No power – the detachable storage case can be used as a manual grinder.

In doing their research, Easy Grinder found that there wasn’t a powered grinder on the market that worked – they ordered one to test it and it actually broke down on its first use. Another thing they discovered was that people were complaining how they had coffee grinders at home, but nobody could take them anywhere because its a big bulky item that requires being plugged in.

With flower seeing an increase in popularity as states continue legalizing marijuana, it was the perfect opportunity for Easy Grinder to get their foot in the door of this booming market. Analyzing consumer feedback, Nahon came to the conclusion that Easy Grinder was a product for which there was a great need.

So intent on having a quality product was Yaniv Nahon that he traveled from the company’s Miami, Florida headquarters to China where he opened his own manufacturing facility. Having the Easy Grinder made in a controllable environment was important because the pre-launch buzz was so great that the company wanted to be sure they could fill every order and keep up with expected demand.

The Easy Grinder went through nine versions before it was ready for its official unveiling. One reason that the device took so long to perfect was that in China, it couldn’t be tested with cannabis because as Nahon points out, “In China, if they find you with ‘weed’ they shoot you.” So, they initially tried it with dry tea and tobacco before sending the samples to the U.S. where it could tested with actual sticky cannabis.

Finally, with a product that met their strict requirements, the makers debuted the Easy Grinder at an industry trade show in Los Angeles. “Everybody was talking about it. . . we were so busy taking orders that it was insane,” Nahon recalls.

Positive reviews have been written about Easy Grinder by High Times and Cannabis Now magazines. Marijuana.com called Easy Grinder “a great investment for the connoisseur roller or an ideal gift for the ‘Sharper Image’ smoker in your life that must try all marijuana-related technology that looks like it could be sold at an Apple Store. Either way, whoever ends up with the device will have a top of the line shredder.”

Not only is the Easy Grinder, a giant first step into the cannabis industry for the company, which has big plans for the future, but this first product offering has the ability to help people beyond the everyday smoker.

Amazing feedback has come from people with Parkinson’s, for instance, and who are really shaky or don’t have power in their hands to use a manual grinder.

“The Cannabis industry is focused on helping people,” Nahon points out. “We’re not just in this industry to make a dollar, but our goal is also to improve people’s lives.”