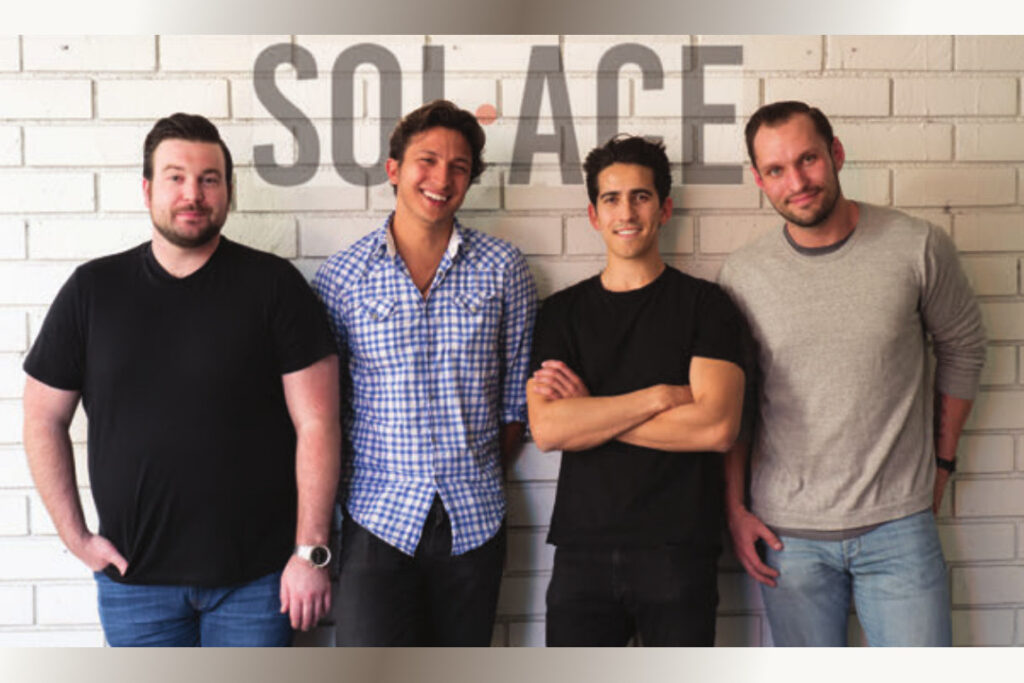 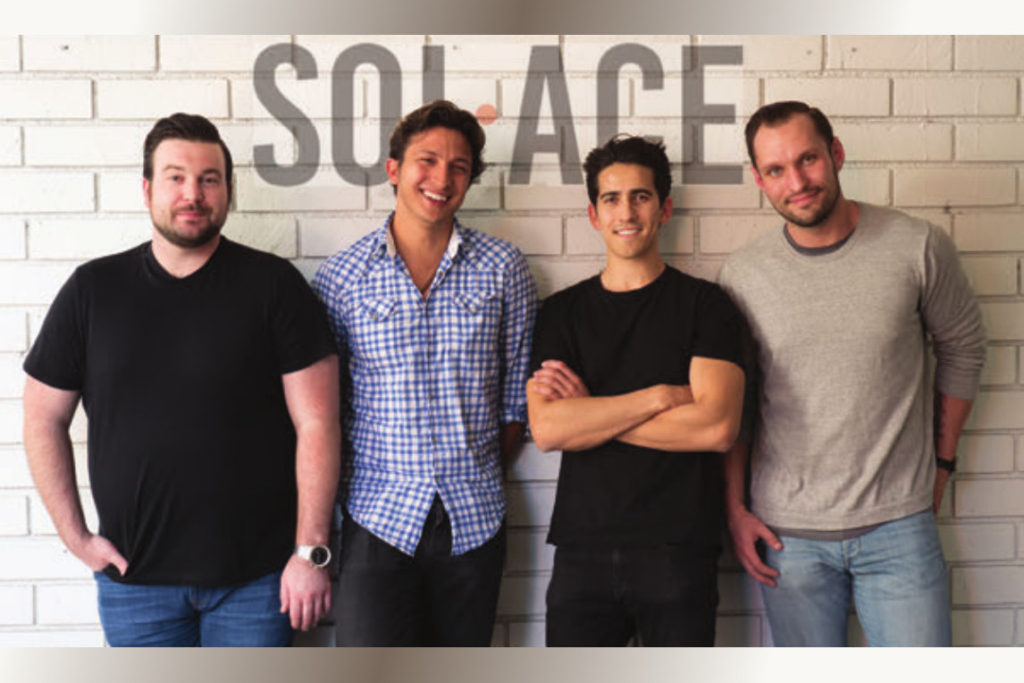 Not only is Solace Vapor a pioneer in the Nicotine Salt category, but their liquid-based formula allows users to fill their favorite non sub-ohm vape devices directly. You could think of Solace as the Microsoft of the vape world, building an open-source product, as opposed to competitors that offer only closed systems.

Solace began as a reaction to the growing trend of vapers converting to discrete low-wattage devices, and the fact that 0mg, 3mg, and 6mg nicotine strengths are basically ineffective in these devices. By altering the pH levels and nicotine found in regular e-liquids to be more efficient and intense, Solace formulated a product that provides a satisfying cigarette-like sensation. 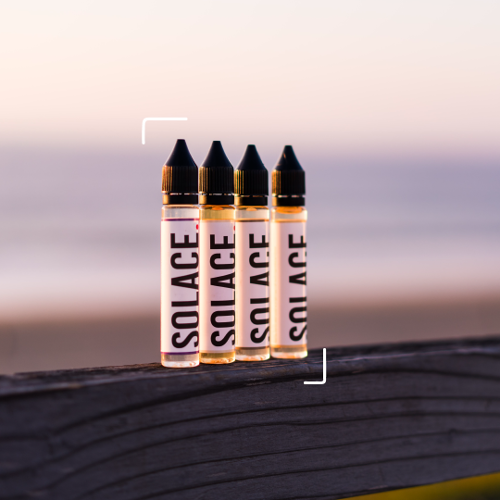 “Not to get too scientific, but what we realized is that tobacco products are more acidic than conventional freebase nicotine,” explains Lorenzo De Plano, co-founder of Solace Vapor with Brendan McDermott, Eric Anwar and Jomie Raymond. “We discovered a number of unique ways to apply natural acidic compounds to our products to make them more acidic. It replicates the experience of a combustible cigarette, because it hits the bloodstream faster, but eliminates many of the harmful carcinogens simultaneously because you’re using heat rather than burn technology.”

“People were laughing in our face and saying this was the dumbest thing ever,” De Plano says. 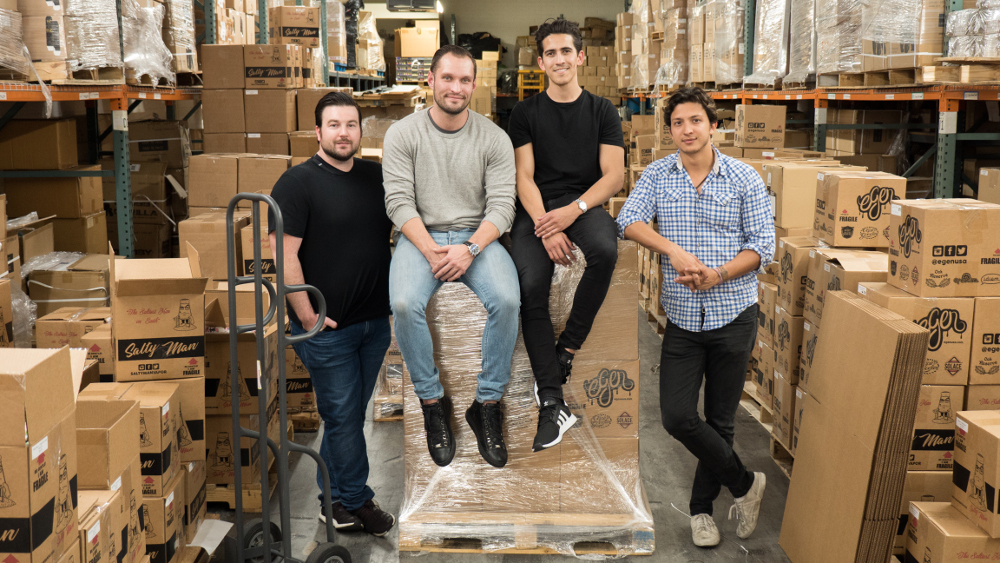 Undeterred, the Solace team went back to the drawing board. They quickly realized what was missing were the right types of devices to go with the new nicotine salts.

Coincidentally, it was about this time that the JUUL, a minimalistic vaporizer that uses disposable cartridges, hit the market. JUUL also uses nicotine salts in their liquids — the only difference is that theirs is a closed pod-based system and uses potentially harmful chemicals such as benzoic acid whereas the ingredients used by Solace are natural.

With small, pod-based vapes becoming popular, Solace’s response was to create an open-bottle product that would work universally with existing devices. 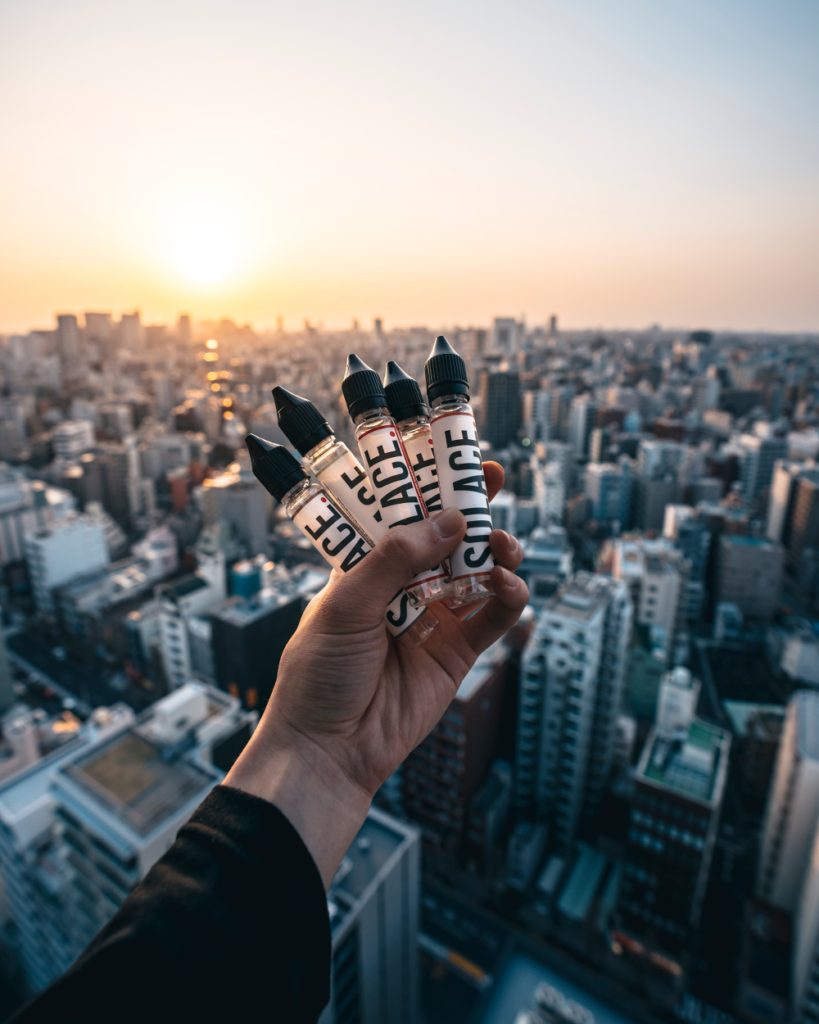 Things really took off after Solace was named Best of Product at the 2017 Tobacco Products Expo in Las Vegas.

“There’s an evolution happening with nicotine salts, unlike a lot of other products in the vaping industry, and there’s a lot more brand loyalty. The vast majority of our customers are actually ex-smokers who stick with what works for them,” De Plano says. “We’ve gone from having our products in 20 shops to more than 1,500 nationwide and countless others around the world.”

Solace liquids are offered in 30 and 50 milligram nicotine levels. Because of their high strengths, they are specifically created to be used with non-sub- ohm devices. Because of the increased pH level, the nicotine gets into the bloodstream almost immediately.

“It replicates that throat hit and experience people get with a combustible cigarette without having to ingest many of the nasty by-products” De Plano says.

Another benefit with nicotine salts is that flavors are more consistent because of the strict adherence to formulas.

“You can’t just mix chemicals together in a basement,” De Plano states. “Every component has to be broken down and accounted for. You’re dealing with higher nicotine concentrations and a lot more flavoring, so optimizing that results in better flavors and a longer shelf life.” 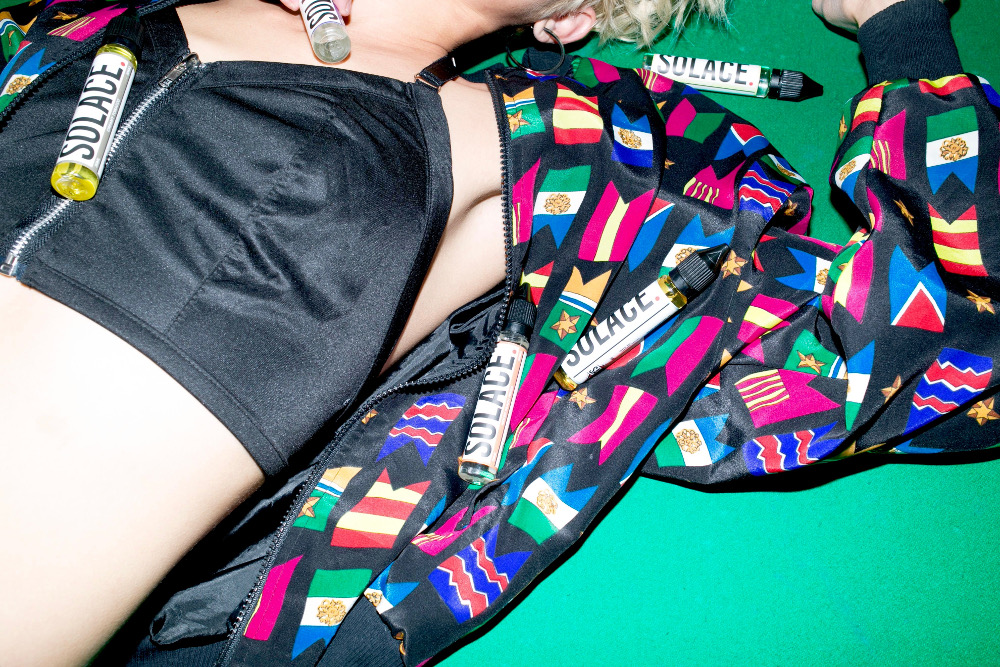 Retailers might have been reluctant to take on this new product category in the beginning, but according to De Plano, 50 percent of conventional vape brands on the market have followed Solace’s lead and now offer some form of nicotine salt product.

“The reality though is unless they manufacture through us, we know there is a good chance they’re coming out with their products after the FDA deeming regulations for new product registrations,” De Plano says.

“A lot of brands come to us to manufacture their nicotine salt products because of our expertise,” De Plano adds. “As manufacturers and brand owners, we welcome collaboration with other companies. We think that’s going to make this industry stronger.”

According to De Plano, many consumers are now shifting towards nicotine salts from Solace and other brands, and away from JUUL products because of JUUL’s higher price, limited flavor offerings and a number of other reasons. Smart retailers are educating customers as to the variety of open-pod vape systems that can be refilled with nicotine salt liquids — – resulting in a better experience from a flavor standpoint at a fraction of the cost.

“For the everyday user, it is going to be the new best thing,” De Plano says.

“It should also be attractive to the retailers,” De Plano adds, “because they can sell the devices and the nicotine salt liquids, and they have a superior profit margin rather than with JUUL.”

So, could nicotine salts be the corner piece in vaping’s puzzle to replace cigarettes?

“It’s definitely a big step in the right direction,” De Plano says. “The honest truth is that the vape industry is still relatively young and there is significant research and product development that needs to occur. At Solace we’re committed to continuously optimizing and improving upon the safety and quality of our products — this tends to have the highest growth yield over the long run.”

WHAT ARE NICOTINE SALTS? Nicotine Salts have an altered PH balance through the addition of various non-toxic acid compounds, which essentially recreates nicotine as it exists in tobacco leaves. Up until now, a traditional combustible cigarette would always have a nicotine delivery that was vastly more efficient and immediate than a standard vapor product. Through the right concentration of nicotine salts and the use of low-wattage devices, Solace Vapor has bridged the gap between smoking and vaping. 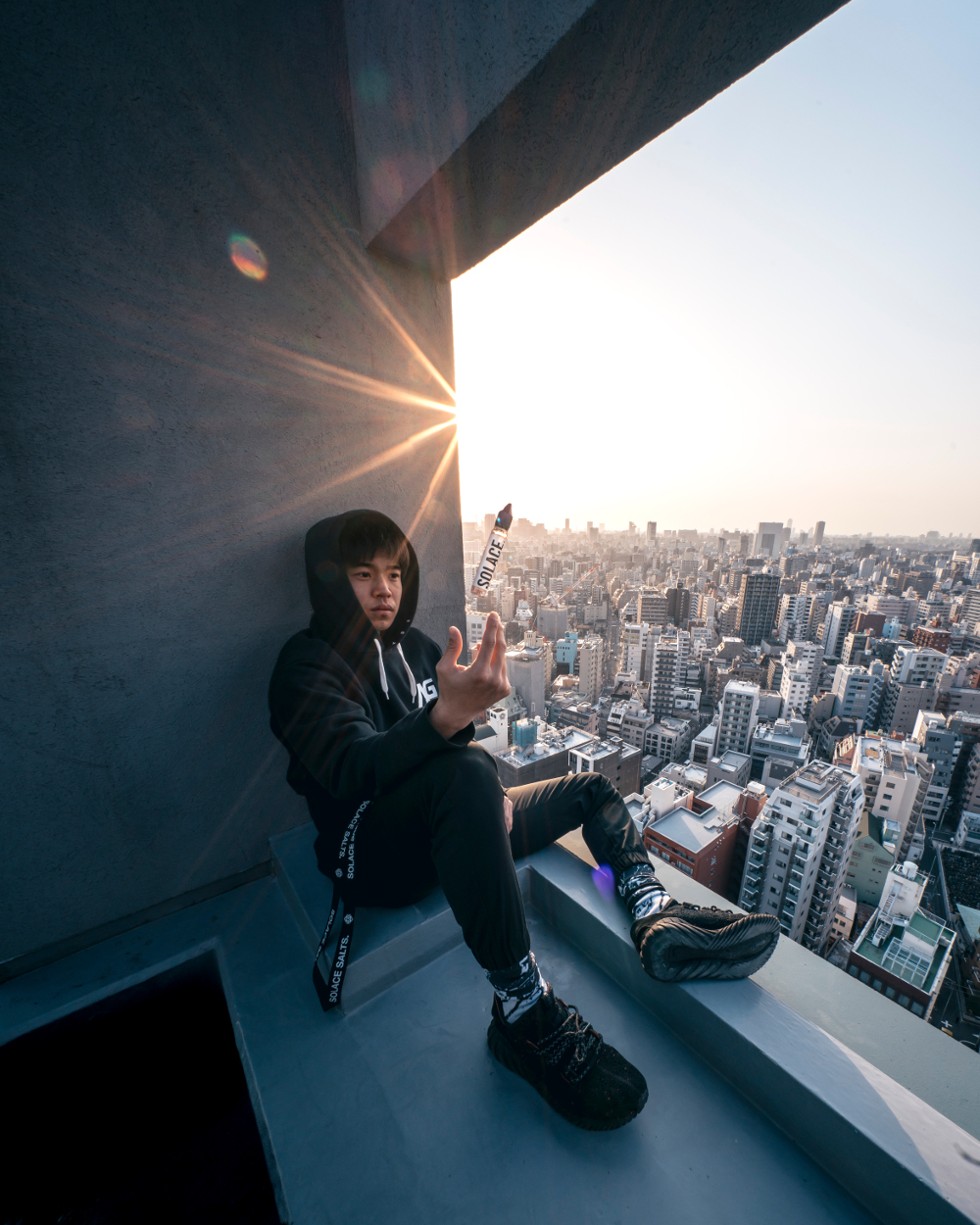