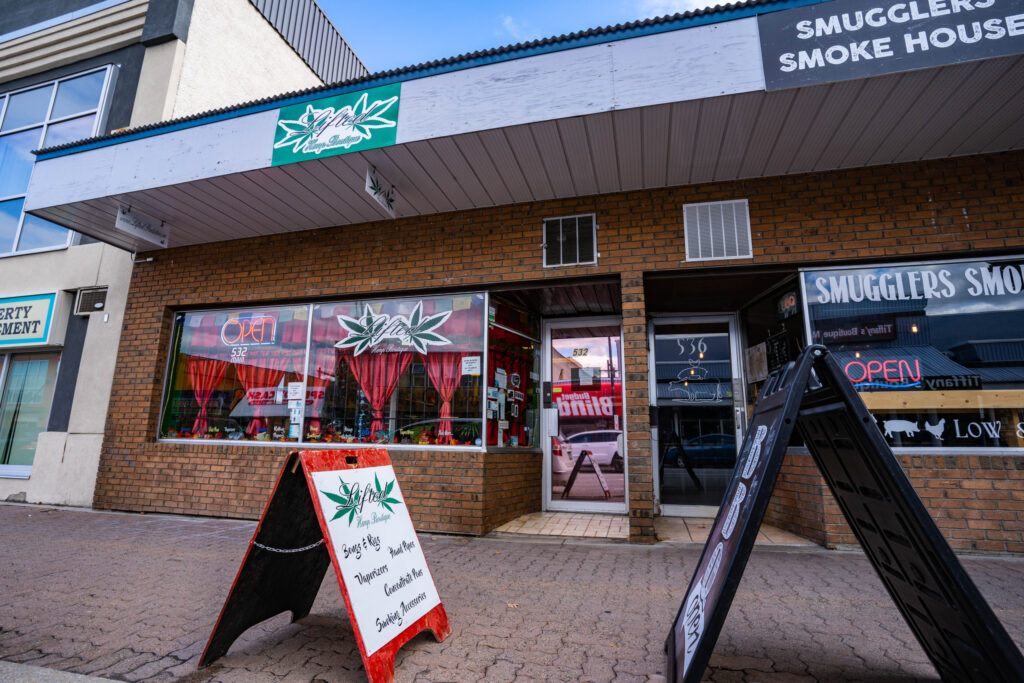 All I have to do is reference the scene. Immediately, we all blurt it out in spontaneous unison, each of us affecting our best stab at Jim Breuer.

The laughter comes next, along with a round of covid-inspired, long-distance high-fives. Smiles and laughter are easy to come by here. Not the forced kind, either; not remotely. Lifted Hemp Boutique in Penticton, BC is just the kind of place that’s naturally conducive to a good, genuine belly laugh. In classic “head” speech, it has “a vibe, man.”

This isn’t news to Tanya or Susie. That “vibe,” as we’ll call it, is something they’ve actively cultivated. It’s a personal philosophy that doubles flawlessly as a marketing theme.

“We’re the friendliest head shop in town,” Tanya interjects with a mock commercial tone to her voice. “It’s our hashtag.” She’s not kidding—and that mocking tone doesn’t at all take away from the conviction of her assertion. It’s clear that she means it, that it’s a quality for which she and Susie strive well beyond a gimmick or a catch phrase. It’s arguably why their “little boutique,” as they describe it, came into existence in the first place.

Once upon a time, both Tanya and Susie were the star employees of the outlet that is now their biggest competition. It’s impolite to kiss and tell, so we won’t name names. All you need to know is they are a three-store chain and were the only game in town for far too long.

“I worked at all of her locations,” Tanya recalls, “her” referring to the owner of her former place of employment. “I liked the products I was selling, and I was making great money doing it, but ultimately, she does business differently than I do. I believe in making a few dollars off of someone many, many times, rather than the ‘one and done and I don’t give a shit about you,’ approach. That’s the difference with us; our customers know we give a shit.’” There’s a dry, but lovable sass to her voice as she caps off the final sentence and I can’t help but rasp out a chuckle.

“It was quick,” she adds with a beaming smile. “I had this place leased barely two weeks after I left my job.”

“We had talked about the idea of branching out,” Susie chimes in. “She mentioned it a couple times and I was like, ‘Yeah, I’ll go with you any day of the week.’”

This is actually the point I referenced at the beginning of the article, where I compare her story to Brian, AKA, Jim Breuer’s triumphal exit from his burger-flipping job in Half Baked. They both laugh with a familiarity, as if they’ve made the joke themselves before.

It wasn’t exactly like Jim Breuer, though. She walked with two employees following her lead, not one. The third member of the rebellion has since moved on, but Tanya and Susie are still plugging away with no intentions of slowing down.

It’s been two and a half years now, and though Tanya hasn’t yet drawn a paycheck for herself, she couldn’t be happier with the progress they’ve made. She has solid enough reason; their customers are insanely loyal, their Google and Yelp ratings are the best in the South Okanagan Valley, and she’s done it all debt-free. All of this, despite the fact that she opened on the eve of legalization, which means she had to compete with a growing number of startups looking to cash in.

“The difference between us and the rest of them is cost effectiveness,” she offers, unafraid to divulge the secret to her sauce. “We know what sells on the constant. That’s been a big thing for us; products that are constantly moving because our store is so small.”

“Once in a while,” Susie adds, “We’ll bring in a more expensive piece just to give our people something to talk about, but usually, we don’t go over a couple hundred dollars for a bong or a rig.”

A look around the store confirms their words. There is without question, a tasteful and uniquely diverse selection of merchandise with a heavy focus on local production, but it’s all working class. There are no museum-ready glass pieces or bank-busting e-rigs. It’s just the bread and butter, but it’s home baked and hand-churned. Experience has equipped them with the ability to find the perfect sweet spot between what sells the fastest and what provides the most value—and it’s practically algorithmic.

“Whether it’s here now or before at the other store,” Tanya says, “People always love to come see us because we have the product knowledge and we understand their needs.”

“Especially with Covid,” she continues, “people are just not making those extra purchases right now . . .  it’s all essentials. It’s ‘I need a new bowl,’ or, ‘I broke my downstem,’ or ‘I need my cleaner.’ It’s all necessities right now. We get that.”

The fact that a two-year-old business could survive a pandemic should say enough. They did close briefly but were able to maintain sales through curbside pickup and home delivery. They made it a labor of love to continue providing their customers with what they needed through the direst points of the ordeal and their customers responded in turn with their loyalty.

“It’s all about our customers,” she says. “They didn’t have to be ordering from us. They could have gone to the other store who didn’t close their doors for a day, but they decided to stick with us.”