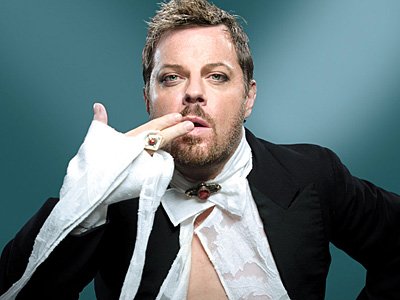 Perhaps Live at Madison Square Garden‘s opening serves as a warning. The viewer is transported via helicopter ride all over various parts of New York City and surrounding environs. There are glimpses of Eddie Izzard acting like a spy or perhaps a superhero, dashing about, only giving us a brief glimpse at a time. It gets hokier, too, as no real story (or joke) unfolds, and we finally make it to the Madison Square Garden stage where Izzard is now jumping and greeting his crowd in slow motion—!!!—and clearly enjoying his celebrity. He eventually starts actually saying things to the 18,000-plus folks that sold out a legendary space (he’s one of only four comedians to ever perform at MSG) to see his humor, but even then, we don’t get a joke until past the five-minute mark. Maybe this is what he meant in a press statement that said the special was “about everything that has ever happened…with a few gaps.”

Beginning with a discussion of his lack of faith, Izzard launches into a rough narrative in which he calls dinosaurs “rubbish,” frequently goes in and out of character, and rambles in various ways, clinging roughly to the evolution and development of the universe as we know it. It’s tangents and general nonsense (like the opening) that allow Live to stretch itself out over an hour and a half. And he’ll allow those tangents a pretty wide berth, too: Mars Bars, factories, Wikipedia, Nazis, smoothies, Apple products, eating chipmunks as hors d’oeuvres, and so on. But coming back to his throughline keeps things familiar, like running into an old friend at a concert.

“I never knew how to end that thing, so now I just kill things with bazookas,” Izzard muses. “I got that from you. It’s kind of an American-policy thing.” At another point, he discusses how the EZ Pass confused him for years. These are enjoyable moments, but they’re not really jokes. They’re more along the lines of, “Hey! I’m British! You’re probably not, since you’re in Madison Square Garden! Great, right?” People like to relate and be in on this faux-camaraderie, sure, but it’s not exactly comedy—certainly not in the way his puking-as-opera bit is, to take just one rewarding example from elsewhere in the special. (All of this being said, as a white Midwestern expatriate who appreciates his “American dude” accent, maybe this whole culture-clash “joke” thing is on the mark after all.)

It’s worth noting Izzard’s clear debt—one he’s happy to admit to, at least through references here—to another famous British comedic force of nature prone to outlandish weirdness and random, nonsensical goofabouts: Monty Python. The difference, of course, is that Monty Python possesses the shared brain power of half a dozen very funny folks. Some of the tangents are rewarding, especially when he finds the funny, weird parts that we take for granted. But too often, Izzard feels like he’s having a conversation for himself, by himself—more like he’s actually struggling with What It All Means as opposed to mining it for laughs. Perhaps if the narrative paper writings didn’t feel like something strung along to create a false sense of story, it would all be worth it. Instead, he ends just as he begins, on a hokey moment involving a giant squid and some more slow-motion footage, this time of the crowd showering rapturous cheers and applause upon their apparent hero. And just like that, “old friend at a concert” turns into the “clueless friend who’s way too chatty and always on the couch.”