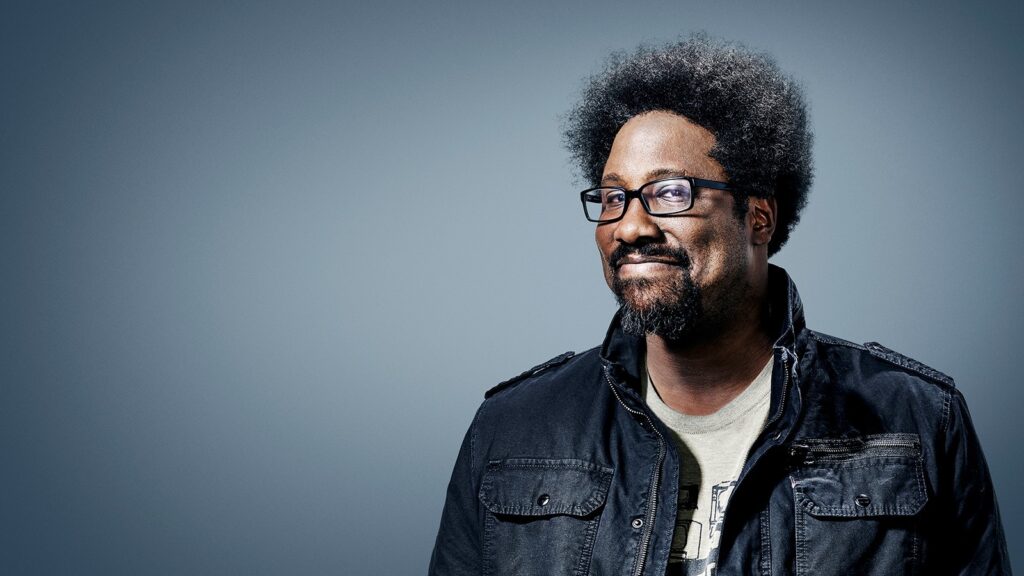 Times like these, you need a funny person who understands politics. W. Kamau Bell has honed his witty, managed outrage at the world around him into a consistently hilarious brand. Like any comedian who focuses on cultural material, in his early years he battled to find the right mix of commentary and humor, but things started to turn around with his one-man show The W. Kamau Bell Curve: Ending Racism in About an Hour. As Bell told the A.V. Club in 2012, “You can’t ask people to come out to see you do an hour of just you talking about race, unless you’re famous.” So he wrote the show as if he was famous. It was a hit in San Francisco, and it would eventually lead to his weekly-then-daily-then-sadly-cancelled TV show for FX, Totally Biased.

You haven’t always identified as a political comedian, but that label has kind of been put on you lately, has it not?

It’s certainly become more purposeful over the years, but at first, I was just talking about my perspective. If you put me on a show with other political comics, I will look somewhat different, because I’m not talking about the players. I’m talking about identity politics or sociopolitical politics. As you get older in life, I have a daughter, you start having a different investment in the world, and the world sticking around and going down the right path. But I still try to be funny. If it’s not funny, it’s just a really poorly put together speech.

Are you trying to say that taking care of another human being makes you care about the world?

Yes! [laughs] I am ready to make this bold statement, yes. When you’re responsible for another human being, you care about the world. I mean, you don’t have to. There’s the option of being a bad parent. Every day I’m invited by my circumstances to be a bad parent, I just try not to choose that option. Being a bad parent is way easier, I think. You get a lot more sleep and you still get to hang out with your friends.

Before Chris Rock approached you about making a show, did you have any desire to be on television?

Well, yeah. I was working to get on TV like every professional comic in the country. You might not be on the path to get on TV, but you want to get on TV. I would submit sets to late-night talk shows, but they would think it was too political, too topical. And I was like, “Well, that’s kinda what I do.” I never really invested in rewriting what I was doing, so I tried to pursue my own direction. So when Chris came to me with the opportunity, I was shocked by it, but it was also something I wanted to do.

You’ve said on your show that the Internet ruins everything. You were joking, but do you feel like it does more harm than good sometimes?

It depends on how you measure good and bad things. Lindy [West, who debated Jim Norton] getting all those negative comments is horrible, but thank god the guy released the Steubenville video, because those guys got caught. There’s the Twitter that helped create Arab Spring, but there’s also the Twitter that’s has #EightWaysToPunchAWoman as a trending hashtag. You could fix it without getting rid of it. I feel like, right now, with the Internet, we’re like the caveman who just discovered fire and are like, “Man, this fire’s great!” and they jut keep burning themselves with it. I think in 50 years people will look back on how we use the Internet, and will be like, “Ah, they didn’t know what they were doing.” That’s my hope, anyway.

Outside of your professional life, what’s the funniest thing you’ve experienced this week?

I live on the Upper West Side of New York, which is a fairly nice neighborhood, and I was in a bakery with my daughter getting her a cookie that she shouldn’t have had, but her mom’s out of town so what are you gonna do about it? And I heard a white woman say to her 9-year-old son, “It’s pronounced crah-sahn, not crussant! It’s French!” And I was like, “Man, this is not the neighborhood I used to live in!” [laughs] Bad things haven’t happened to you in a very long time if you’re getting mad at your son about that. You are living the best life ever if you’re willing to go, “Hey, wait a minute, we gotta stop here.”