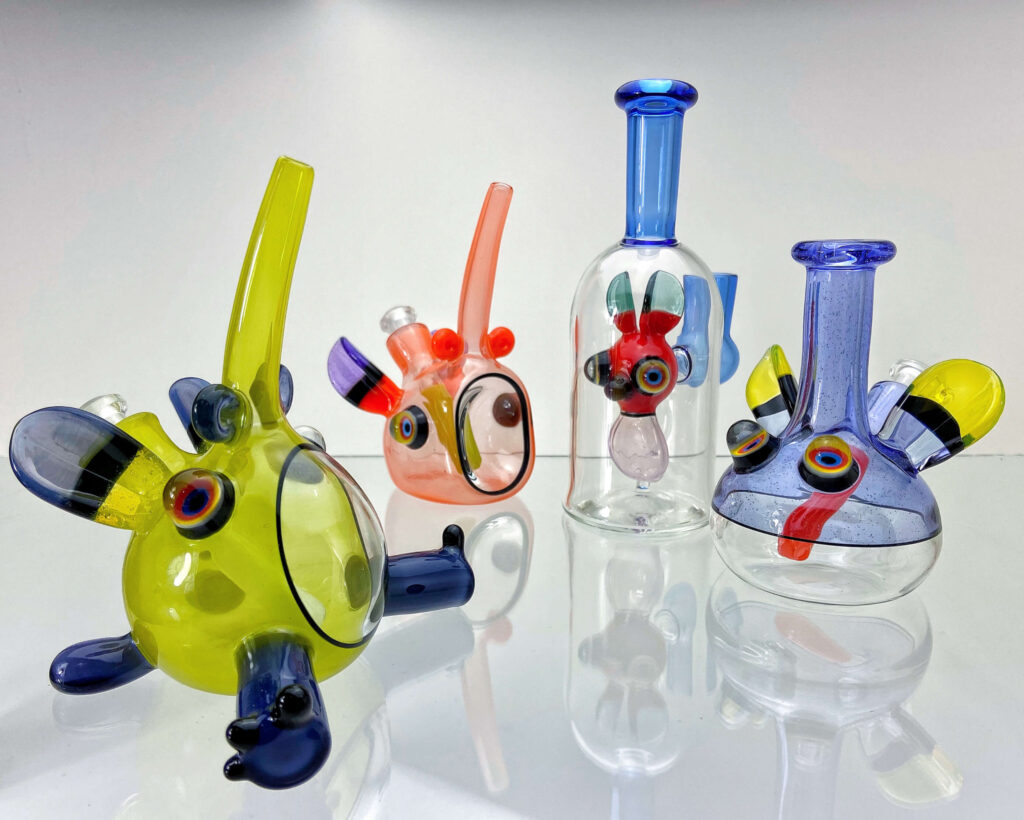 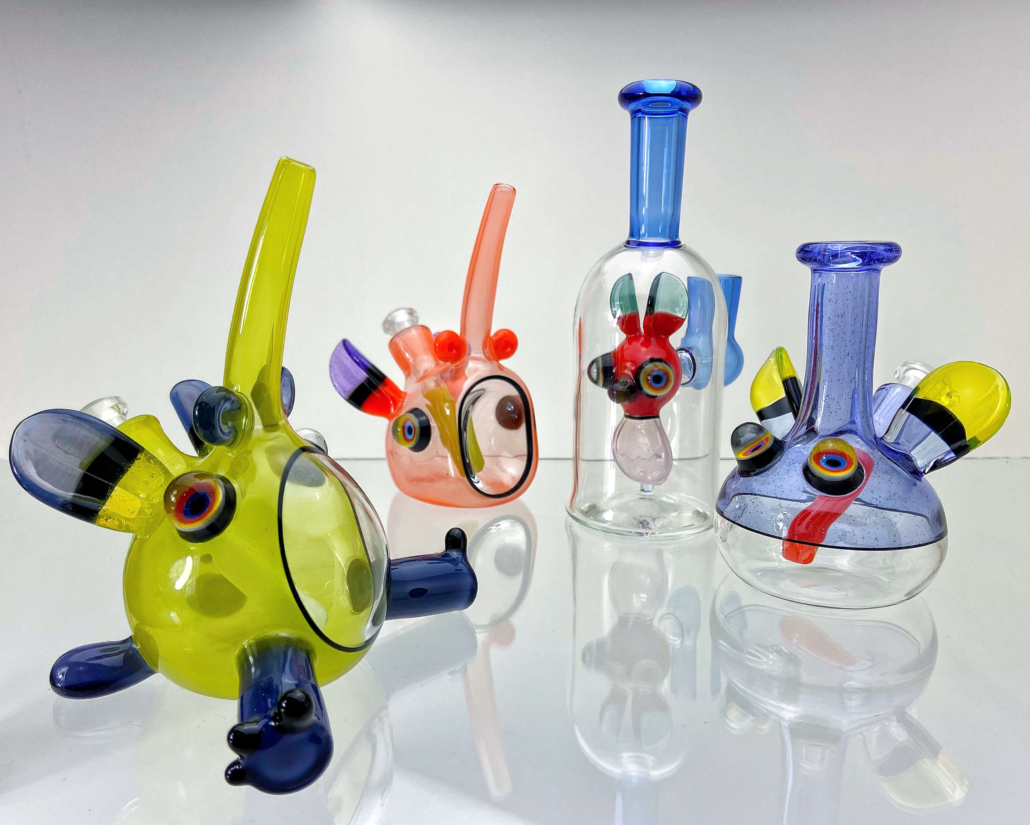 Beccy Feather is a British born artist who attended Wolverhampton University in the UK where she graduated first in her glass making program. She has travelled and worked for studios in Canada, America, Australia, New Zealand, Singapore, and Turkey. In 2010, Feather completed an MFA in Glass from Rochester Institute of Technology. She is skilled in the hot shop creating goblets, bowls, and candelabras.

It wasn’t until she met pipe makers Salt and Elbo that she got a real schooling in flameworking. Like any apprentice, she started with the basics, adding frit to basic production pieces, and suffices to say, it was a humbling experience.

“I thought I had a grasp on what flame working was, but the skill level in the studio working with torches, colors and details was so much higher than anything I had seen before. My teachers in England didn’t really know anything about it, and the scientific industry in the UK is pretty underground,” Feathers says.

“You’re very limited in the hot shop, and there are endless possibilities of what you can do with borosilicate glass,” Feather adds. “You can work pieces almost infinitely and get much more detail with the flameworking process.”

Now based in Bremerton, Washington, a ferry ride across Puget Sound from Seattle, Feather has established her place in the cannabis industry with a style that is a mixture of fine craft, humor, and home science, which can be seen in her Mouth Breather creations. If you remember the Nickelodeon animated series Aaahh!!! Real Monsters then you’ll recognize the similarities to Feather’s big-head recyclers.

It’s no coincidence that Feather incorporates bold color combinations into her work. As a board member for Glass Alchemy, maker of colored borosilicate glass, she gets to “mess around” with all the newest colors. 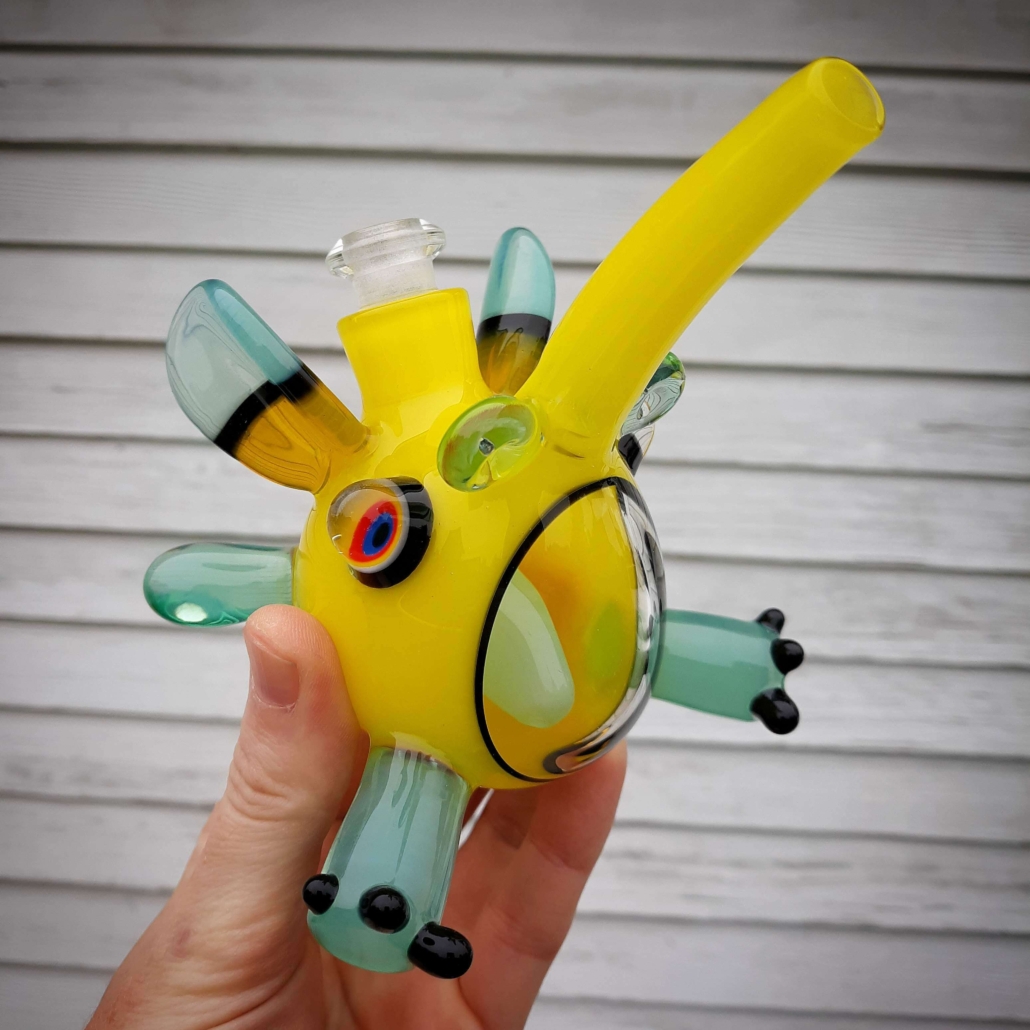 One of the most rewarding aspects of pipe making for Feather is that people actually use her work rather than just admire it on a shelf.

“There’s also a real tactile experience that you get from a piece because of the amount of time that you hold it in your hand,” Feather says. “Collectors in this industry tend to really educate themselves about everything to do with the piece. It’s really great to have people who understand the amount of effort and energy and passion that goes into the things that you make.”

It’s not only cannabis smokers who appreciate Feather’s talents. There’s often a wait list for her flameworking classes at Pilchuck Glass School and the University of Washington School of Art + Art History + Design. Even though Washington is a 42-friendly state, Feather can’t exactly show her students how to make bongs. Instead she demonstrates the relationship between form and function with some unique, and frankly, totally cool projects. Check out her YouTube channel and you’ll see her shooting off a glass rocket, taking a photo with a 20-foot long glass self-stick and flying a glass quadcopter.

“The students are really interested in glass as an art form,” Feather says. “Still, nobody blinked an eye when I said I was a pipe maker. The head of the department at the UW is actually super excited about the scene and impressed that I’m able to make a living from my glass work.”