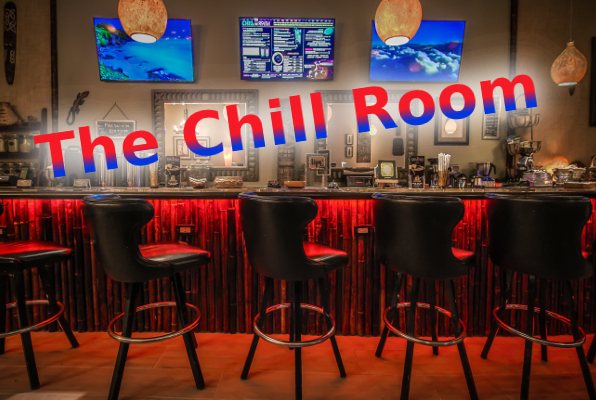 If you sense a chill in the air in Palm Beach, Florida, it’s likely coming from a Polynesian retreat where they serve hand-selected Kava from Vanuatu, aromatic coffee from Kona, fresh local Kombucha on tap and where those wanting to destress from the daily grind can take a drag on a hookah or a puff on a flavorful vape and indulge in good company. Welcome to The Chill Room.

The Chill Room is an offshoot of The Vaping Store operated by Robert Cartagine, his wife Lynn and their son and daughter, Joseph and Jessica. When they started thinking about expanding, the idea was to create not just another store that sold vaping products, but a new kind of “social destination.” “People don’t really hang out at vape shops, so we decided to including some of the popular social things that people like to participate in — down here a lot of the younger generation would rather go to a kava bar than one that serves alcohol,” Cartagine says. 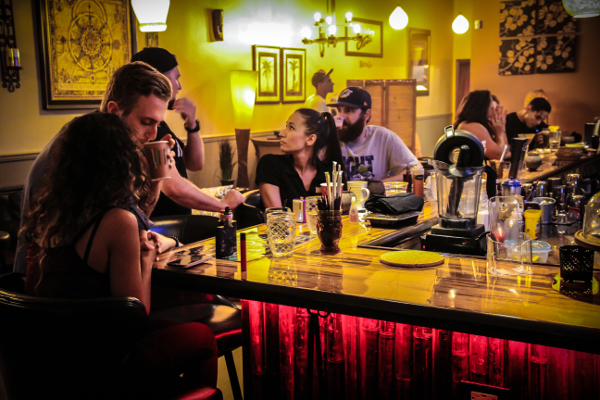 With Florida recently legalizing medical marijuana, there had also been an influx of seniors at the Vape Store looking for cannabis related smoking accessories. Knowing there was a growing market for glass pipes and other such items, the Cartagine’s incorporated that niche into their new venture. Up front, you can hang with friends and enjoy a refreshing and invigorating beverage. Head to the back and you’ll find the Glass Gallery, a full-stocked smoke and vape shop, and visible from within is a glassblowing studio where you can watch artists like Scoz, Darby, Sherlock Holmz, Doc, Rone, Hellraiser, and Kizmit at the torches creating one-of-a-kind pieces, many of which find their way into the gallery for sale. 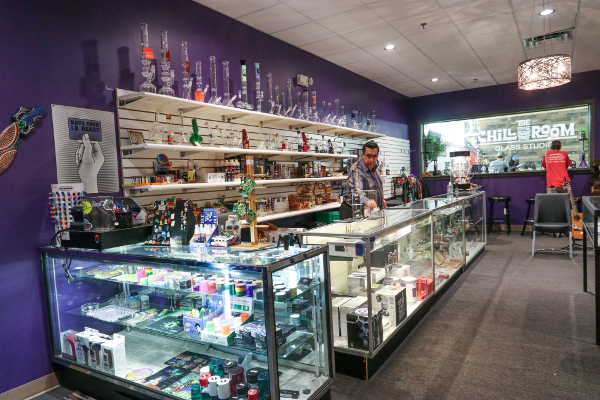 Initially, The Chill Room attracted 20-30-somethings, but after advertising on the radio, more seasoned customers, up into their seventies, started coming in. “I think the seniors really appreciate the Glass Gallery because it’s not intimidating,” Cartagine says. ” It’s not super psychedelic and is more laid back than the typical smoke shop.” Young and old commix at The Chill Room. The kava bar is a big part of that. For those not familiar with kava, it’s a root from a pepper tree that grows only on Polynesian Islands like Hawaii and Fiji. After being dried, it is ground into a powder and mixed with water to create a therapeutic drink that Islanders have enjoyed for hundreds of years. It has similar effects as alcohol, but doesn’t make you impaired or unable to function. “Kava has a very unique property that makes you super relaxed and super chill, but at the same time your mind is very active; you want to talk to people and have conversations,” Cartagine says. “It really does create a happy and loving atmosphere where everyone gets along with one another.” 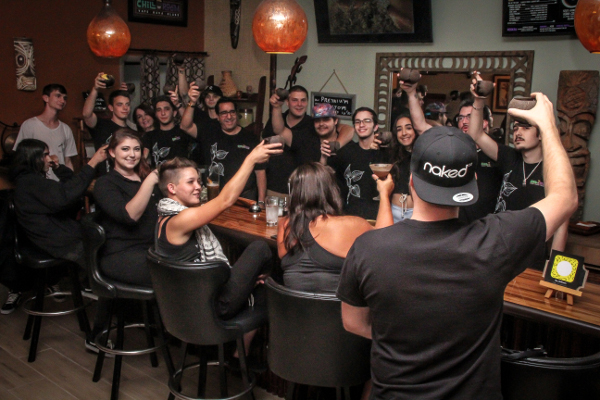 Kava is served in a half-shell of coconut, which is traditionally consumed in one long slurp. The menu at The Chill Room features raw kava drinks, as well as speciality kava cocktails that mask the earthy taste of the root. Also available is premium Kona coffee from Hawaii and hot or cold kratom tea. The kratom they carry is super-high quality and sourced exclusively from MNG Wholesale in St. Louis. As you might expect, one part of The Chill Room feeds the other. Somebody coming in to buy a smoking item might stop off on the way out to grab a shell of kava and vise-versa. If it’s a new customer, the staff is right there to give them a personal tour and teach them about the products they offer. 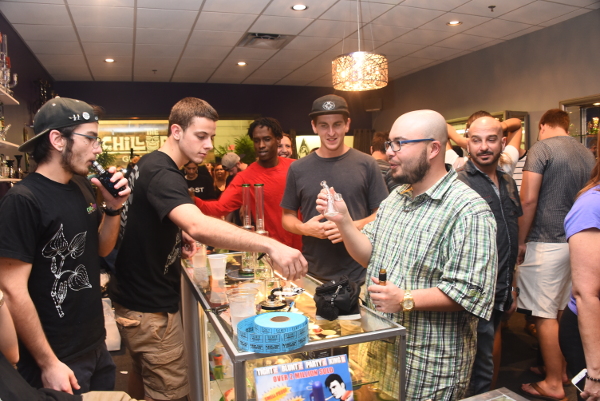 “For the most part, all the same people we started with still work with us. We’ve ‘cross pollinated’ our staff so they’re all experienced in glass, vapes and kava,” Cartagine says. “We take a lot of pride in being able to educate our customers and they feel really comfortable about that.” If you need a can of butane, pack of rolling papers, a coil for your vape or a bottle of e-juice while you’re out at night, The Chill Room is open until 2am. Along with the bread and butter smoke shop products, the Glass Gallery showcases are filled with everything from straight pipes to beakers and rigs of all kinds and a tremendous selection of bangers and dab tools. There’s a hookah section and even a selection of Cartagine’s favorite cigars. Vaping continues to gain steam (so to speak) and the shop stocks a variety of devices from the classic Volcano to the newest vaporizers on the market, such as the Ghost and Puffco Peak. Cartagine is a true believer in the powers of cannabis, kratom and kava to boost a person’s health and wellness. His love of helping others goes right along with that. “When we opened the Vape Store, we helped so many people quit smoking cigarettes. That was the thing I literally lived for every day,” Cartagine says. “Now we’re doing it by helping people find cannabis, kava and kratom as better alternatives to harmful things that they’re doing.”