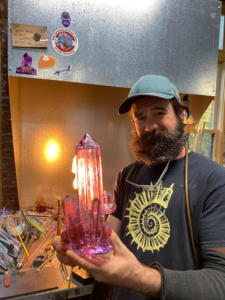 Jeremy Sinkus is a real rock star among glass artists, known for his amazing geological designs, including crystals and gemstones, all realistically recreated in glass.

By layering transparent magentas, blues, emerald greens and clear with the torch and applying a technique he discovered to add texture, Jeremy cold works the glass to create the “tooling’ marks, much like he would cutting and polishing an actual precious stone.

Being a mineral and fossil collector and all-around rockhound earned Jeremy got the nickname Digger. He became enticed to glass blowing in the late nineties after seeing fumed and silver glass at festivals and being captivated with how much its translucent nature resembled iridescent gemstones and minerals.

“Glass is the perfect material to replicate minerals and crystals with because it was once quartz now mixed with other geological ingredients,” Digger says. 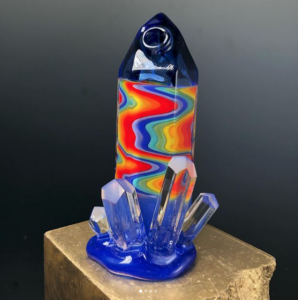 In the mineral world, Digger points out, glass is taboo, and why stones are meticulously inspected and certified to be legit. When he showed his glass creations to serious gem collectors, there was an understandably mixed reaction, but those who got it, loved it. Th glass version of tourmaline, a super rare and expensive mineral, was enthusiastically embraced by hobbyists because of closely it mimicked the real thing. Basically, the big difference about Digger’s glass sculptures is that they are hollow.

And that’s what makes them a perfect pipe.

“I like movement and for things to have a life,” Digger says. The pipe world was a great audience for his work, not only for its artistic appeal, but because crystals are so engrained in the culture. Digger’s crystals are so loved that they’ve become like a currency on the festival circuit. 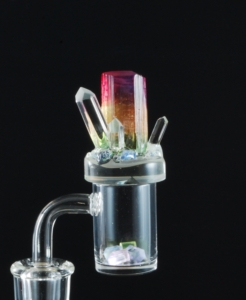 Looking like they were mined from the Fortress of Solitude, Digger’s crystalline sculptures are perfectly functional and range from four to nine inches tall. As beautiful and unique as they are, you’d expect them to fall into the heady glass category and bring thousands of dollars. Most sell for well under a grand.

“I have a hard time just spending a week and going all in on one piece. I like to make things that I know I can complete and sell, so I keep them really affordable,” Digger says. “Every time a piece sell, I’m really happy about it.”

Working at Stone Glass Studio, in Shelburne Falls, Massachusetts, Digger starts much like any glassblower, with a tube that is blown and formed, but in his case, flattened, while still hot. He has custom-made molds for forming the most intricate and precise hexagonal shapes.

“I want the finished piece be a combination of something that looks true to real, but also has some human twist in the colors or adding an element that wouldn’t usually occur in nature to make it more artistic,” Digger says. Perfect examples are where he turned crystal clusters into cactus and added jellyfish inside a seemingly perfect crystal.

“There’s nothing more satisfying than having an idea and turning it into a physical thing,” Digger says. “One thing I like about working in the functional world is the freedom to be creative and not have to make the same exact thing over and over — the pieces can be similar, but also unique in their own way. It’s just like with actual gems and minerals — in nature, no two rocks from one species are ever exactly the same.” 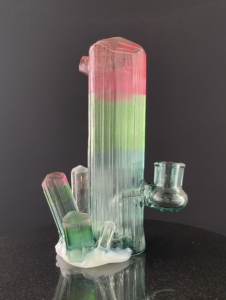