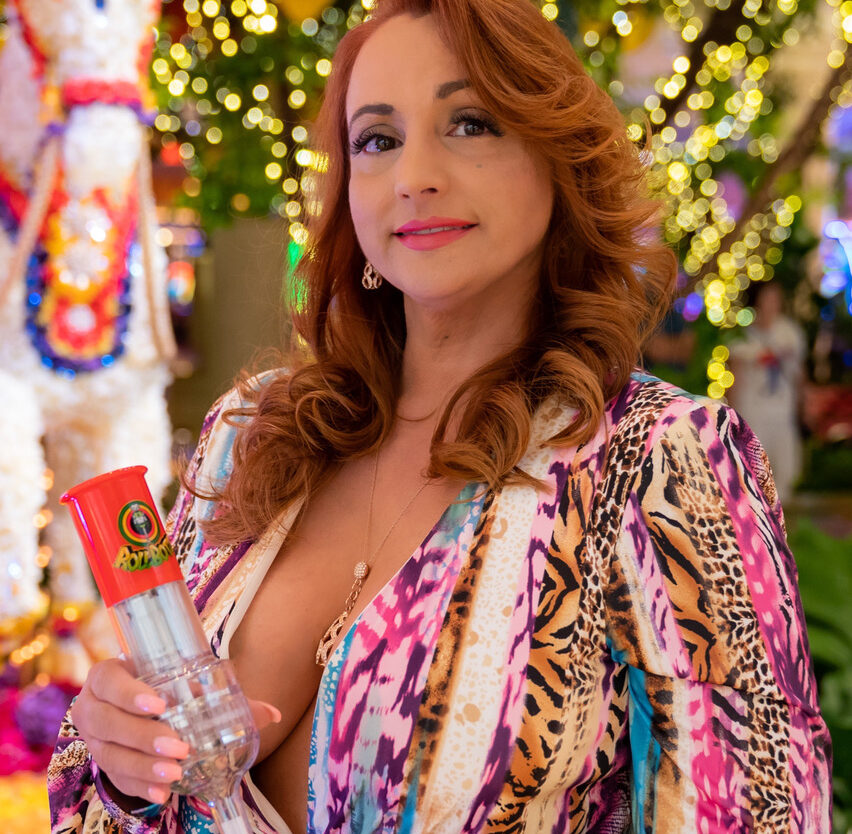 There’s an old saying that behind every great man is a great woman. In the case of G&E Innovations Consulting, it’s more like “beside” every great man– and great product — is a great woman, namely Esther Delgado-Lago, co-founder and co-inventor, with husband Gustavo Reyes, of the revolutionary Wakit Grinders.

Before the Wakit Grinders, Esther had never been involved in the cannabis industry. After coming to the US from Puerto Rico, Esther spent more than two decades in the Sarasota County School District as an administrator and trainer, guiding teachers on effective ESOL techniques for instructing international students from over 65 countries, such as the Middle East, Dominican Republic, Haiti, and other European, and Latin American countries
whose primary language is something other than English.

It was during one of Esther’s out of town workshops that she got a late-night call from Gustavo who’d had a little accident while smoking his pipe and spilled flower on the floor. Cleaning up the mess with a Dyson vacuum, he noticed how the suction power was created by a whirling vortex. It was the epiphany for a new type of grinder,
that utilized a spinning ball and chain to separate nugs from stems and give smokers their flower at the perfect, desired consistency.

For Esther, it was the chance to break out on her own. “I had always been working for someone else — it was stable and comfortable with summers off, but I also had the desire to do something for myself,” she says. “I wanted to bring a product to market, connect with others, and make a difference in people’s lives.”

Trusting in Gustavo’s entrepreneurial vision and financial background, Esther took a leave of absence from her job and the couple moved to California to dive into the smoking accessories market. They teamed up on developing their new product, and when they had a functioning prototype, they began demonstrating it at trade shows and seeking investors. Esther quickly became the face of the company.

“I was somewhat shy,” Esther admits. “But I had to step out of my comfort zone because it was just Gustavo and I,
and with my background, I’m more comfortable speaking in front of a crowd.”

People were in awe of the Wakit Grinder but were oftentimes reluctant to deal with a woman in an industry traditionally dominated by men.

“What I found a few years back, is that when we are talking to distributors and shops, especially those run by
owners from the Middle Eastern culture, they would rather do business with a man than a woman,” Esther says.
“When they call, they ask for Gustavo. He passes on the phone to me, and they eventually warm up to the reality of
working with a female.”

In the beginning, the core customer demographic for the Wakit Grinders was also male. That is balancing out
as more female influencers have been promoting the products online.

“The Wakit Grinder, because it works with a push rather than a twist, helps females with long nails save their
manicures,” Esther says half jokingly. She adds that because advertising has intentionally focused on the
benefits of the electric grinder rather than showing it off in the hands of sexy models, females, whether
distributors, retailers, or end-users, tend to feel more comfortable engaging with the product.

“In the medical industry, you wouldn’t [have hot chicks barely dressed promoting products) so it all depends on your target market. The way we’re trying to position ourselves is as a progressive company with a legitimate product that fills a real need,” Esther says.

In four years since its introduction, the Wakit Grinders has sold more than 150,000 units. The company’s
latest product, the Rollbotz, an all-in-one grinder and cone filler — also highly popular among women – is
poised to bring them even more success, as it solves a problem for consumers prepping their flower.

For Esther, the journey has been about “taking a step forward and saying we’re going to make a go of it.” She hopes that other women and minorities will be inspired to do the same.

“There will always be something that will spark that ‘Aha! moment’ and convince them that this is their calling,” Esther says.

For anyone who wants to come to market with a product or a business idea, she says, it’s about believing in themselves, not losing sight of who they are, and never giving up on their goals.

“If you really, really want to make it happen,” Esther says, “The opportunities are there.”