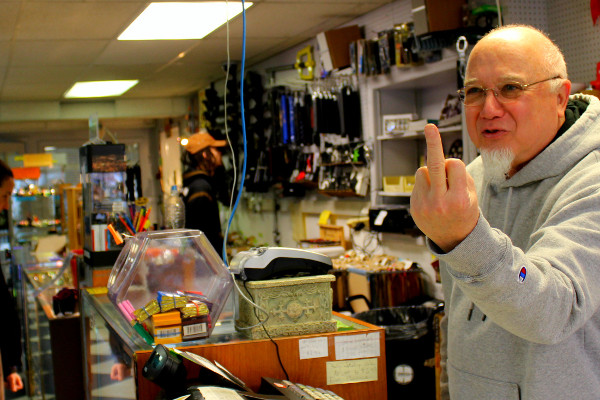 “OK. So again, don’t tell your mom I brought you here. I’m pretty sure she’d put my balls in a vice for this. Don’t tell Pastor Kevin either. Actually, just don’t tell anyone. Got it?”

I hesitated, then answered with a slight, tense nod. I really wasn’t sure if I was ready to walk through the door, or if I could even keep the secret. My thoughts raced back to my Jedi of a mother who always seemed to know every transgression before I committed it. The tragic short film was already playing out in my head. 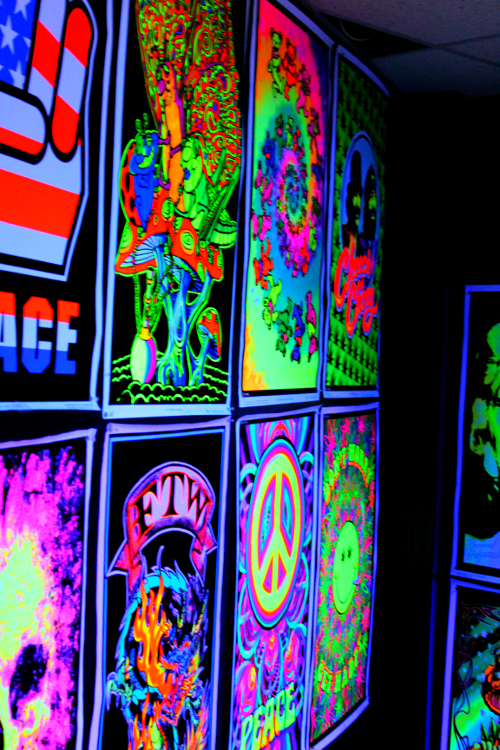 Starring: me, my mother.

But peer pressure is a hell of a drug, especially when you’re 12 and it’s coming from someone six years your senior. We walked in. My breath suddenly felt sticky, as if it were lodged at the bottom of my windpipe as I stared, wide-eyed into the cave of verboten wonders before me. In every direction, I saw literally everything against which I’d been warned, as if someone had chopped down the fabled tree of knowledge itself and opened a fruit stand. Punk rock and heavy metal posters lined the walls, while every assortment of iniquity lined the shelves; pipes, zeppelins, tarot cards, daggers, skulls, bizarre jewelry. I felt faint.

Mitch smiled from behind the counter. 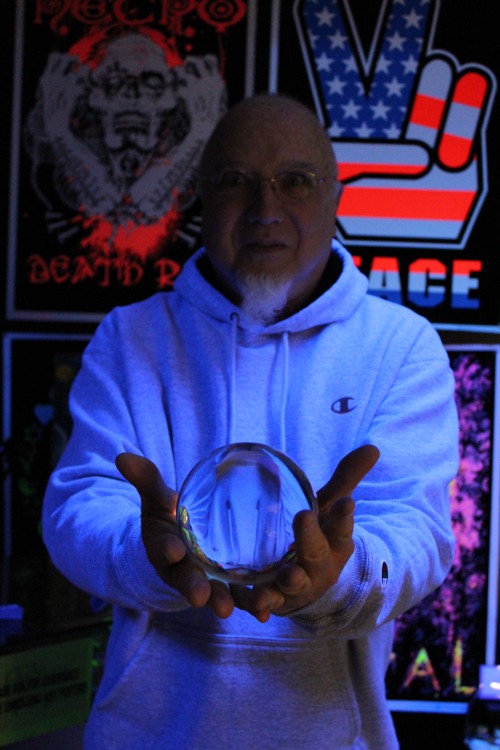 I tried to push out a “hello,” but all that came out was a muted squeak. Each time our eyes met, the rumors about him, whispered on the back of church buses echoed in my head.

I was convinced that he could see straight through me, that he knew I didn’t belong there. The pressure in my lungs intensified. What was this feeling?

In retrospect, it was just the incense. And that knowledge in his eyes, just a recognition of the obvious; a 12-year-old with the build of an 8-year-old and the face of a toddler standing in his shop, wearing an oversized “Racism Sucks” t-shirt he’d obviously borrowed from his friend to look ‘the part.’

For Mitch, it was another day at the shop. For me, it was a defining moment. Perspective is everything.

The scene plays in my head on repeat as Mitch sits across from me. That was 25 years ago. He still has a gaze that seems to cut right through you, though now I just attribute it to an ability to see through bullshit, which, in retrospect, makes perfect sense. I try to tell him the story. He smiles sheepishly, but the gravity seems lost on him. And of course, it is. It was my experience, not his, and it came from a place that is now foreign even to me. 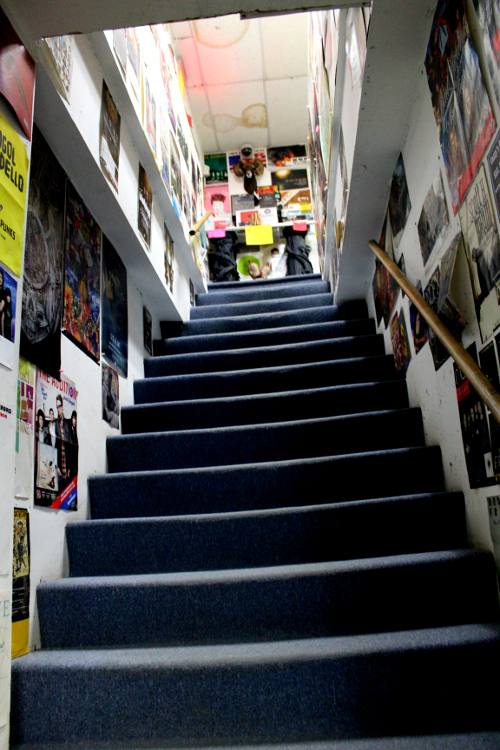 After 32 years in business, Mitch is preparing for retirement. Fantasy, the legendary Newport News head shop he founded and operated all those years will sadly not survive his departure. In a matter of months, the lights at the shop will go out one last time and this business that has become a landmark of Virginia’s counterculture will be no more. I realize that I’m not here for another standard profile, but an obituary, though legends are immortal and therefore, shouldn’t require such.

“I loved the New York trade shows,” he tells me, drifting back to a bygone era of an industry sans-CHAMPS. “I met Greg Allman, I met Country Joe MacDonald—I still have the Country Joe McDonald thing signed here somewhere . . .” He looks at the poster-covered walls of his office and points. “There.”

The walls of his office are a miniature museum of his career as a shop owner. The posters, most of them signed, each have a story behind them, and he gives a little snippet of each as we look around the room. The decades flash through his icy blue eyes as he points out one after another and gives the story of how he met each band and when. Really, this is what it was always about for him; the music. The pipes were just a peripheral, a natural extension of his role as an underground record store, as were the swords, occult supplies, man-sized dresses, et al.

“Music was really what I was into,” he confirms. “We started out in ‘85 in the flea market. I was bringing in import music from England and stuff, you know, Hawkwind and Porcupine Tree and just all of these side projects that nobody else was carrying back then . . . I was going to New York . . . just pounding the streets, finding merchandise that nobody else had.”

“It was just a really cool vibe back then,” he reminisces. “You could go to New York for nothing. It was a $39 round trip . . . Originally, I’d stay at the Y. I stayed at the Chelsea once, just because you had to stay at the Chelsea. Big mistake. The sheets were hairy.”

One story slams into the next as each memory triggers a dozen more. We’re riding high on the tide of nostalgia, three decades’ worth all swirling and intermingling with the randomness of human memory. I bring up the time he invited my first band to play in the upstairs room of the shop. I tell him what a big deal it was to us even though hardly anyone showed up. It’s apparently something he’s heard before.

“A lot of people thank me . . . there are bands that have played here that I don’t even remember, and they tell me how much that meant to them at the time. . . I was glad to help.” The thought triggers another memory, this time of the seminal New York ska band, The Slackers, who played an in-store set there years ago, apparently also to no one. It turned into one long band practice for which they thanked him profusely. Eventually, it devolved into the bandmembers chasing each other around the store with swords and culminated with Mitch having to chase them off the property for smoking in the parking lot.

“But it was all good-natured,” he assures me. “That was fun.” 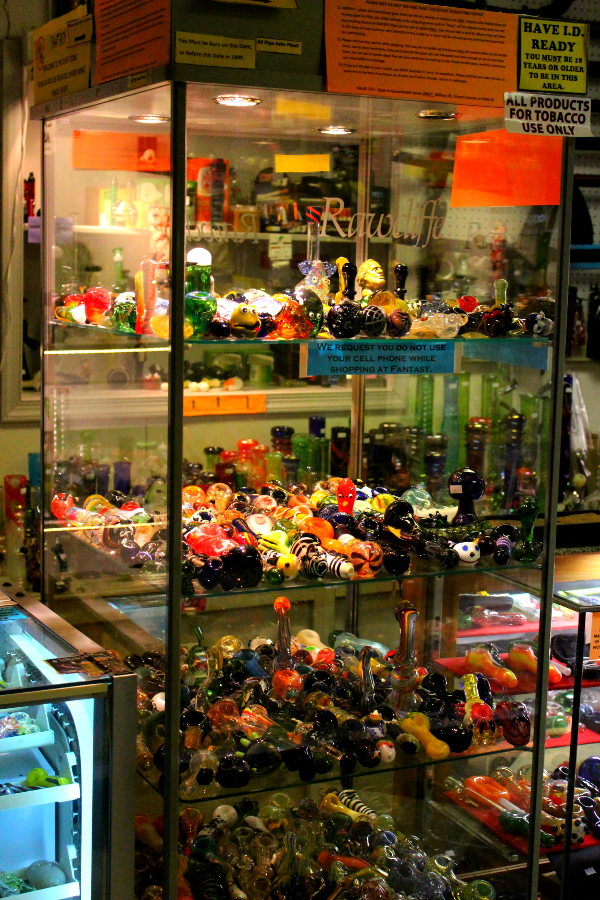 Good-natured or no, it’s a situation for which Mitch has no tolerance. “This is Virginia,” he reminds me. I understand his point. He’s saying it’s not Colorado. Merely tolerating a customer using the wrong word in the store could still bring the house of cards tumbling down, let alone someone partaking in the parking lot. It’s a reality with which he’s all to familiar. He had found himself under the boot of Johnny Law once years ago, all because, yes, a store employee failed to enforce the rules when an undercover walked in and said, “Let me see that bong.” The next day, there were 14 federal agents at his door. They weren’t there to warn him.

Sadly, though the business could survive a federal raid, it wont’ survive the new paradigm, for a myriad of factors. There’s the new fire marshal. He’s not interested in honoring the longstanding ‘grandfather’ precedent for old buildings like this one. He expects Mitch to live up to the standards of Walmart and Target. There’s also the competition. There are now pipes in every gas station. But most devastating to Mitch personally, is the death of the record store in the digital age.

“I can’t complain about people downloading music; I do it myself,” he volunteers. “It was always about getting music for people that they couldn’t get otherwise. Now they can. I’m not the middleman for their music anymore. That took a lot of the joy out of it.” It also took a lot of the money out of it. 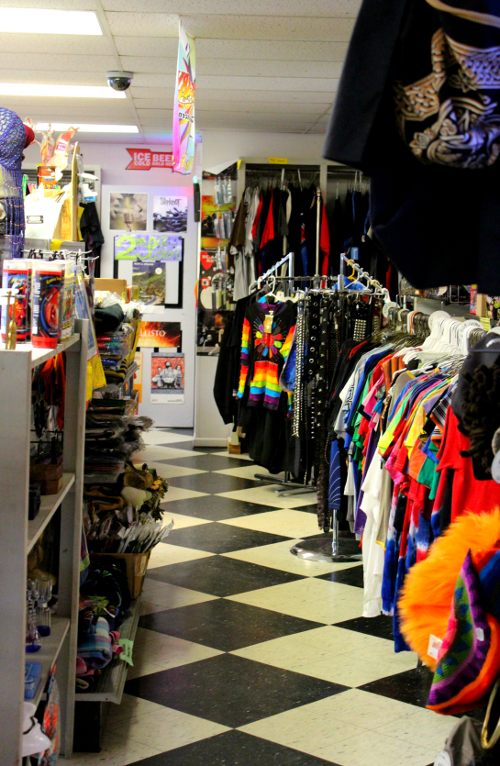 “I looked at my figures from the 90s and I was doing three times the business that I’m doing now. And now I’m working three times harder just to get by.”

Another casualty of technology; one more institution of American romanticism crumbling under the cumbersome march of progress. Mitch Kirsner and the legend he created must now go the way of Paul Bunyon and John Henry before him. With the loss of Fantasy and stores like it, we’re not just losing a place to buy things. We have Amazon for that, everything we could ever want on our doorstep in a day with just the click of the button. But Amazon’s not going to open a new world to a sheltered kid looking for identity. Amazon’s not going to invite a group of fledgling musicians to come cut their teeth as performers on her warehouse floor. Amazon won’t be providing a place where the dissidents and outcasts of society can feel safe. Amazon is convenience; Fantasy is a soul. I fear that in our quest for the former, we’re throwing out the latter.

As both a native of the region and a member of the industry, I pay my respects here. Farewell, Fantasy. Goodbye and godspeed, Mitch. Your business may be replaced in our world, but never in our hearts.