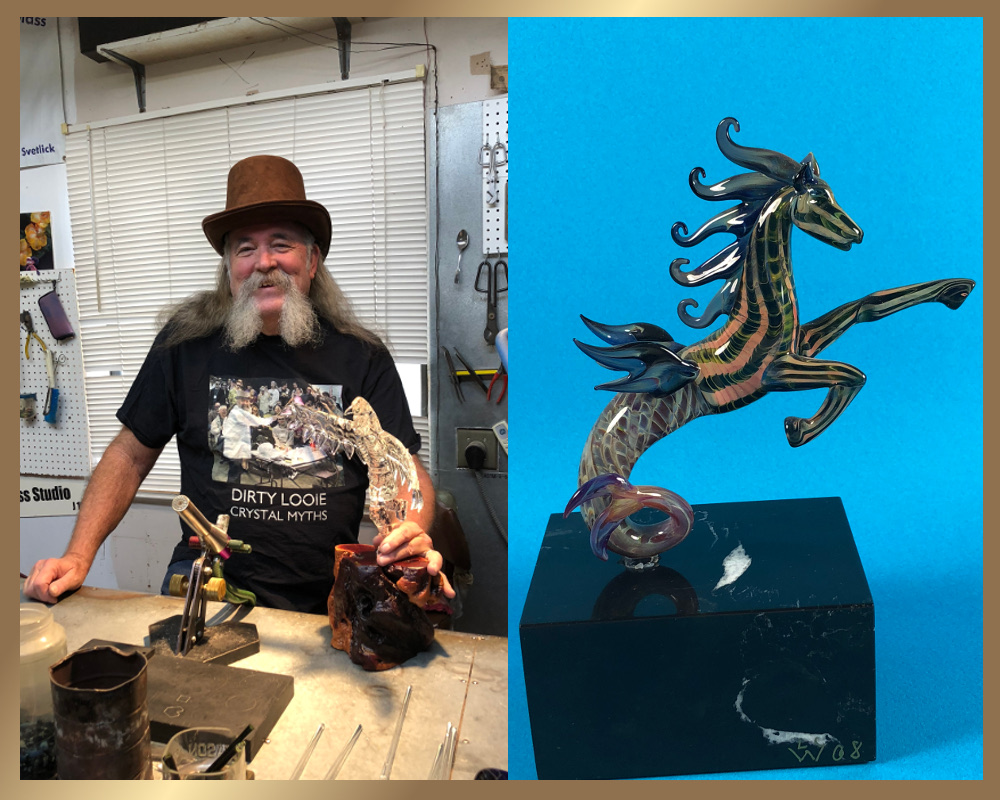 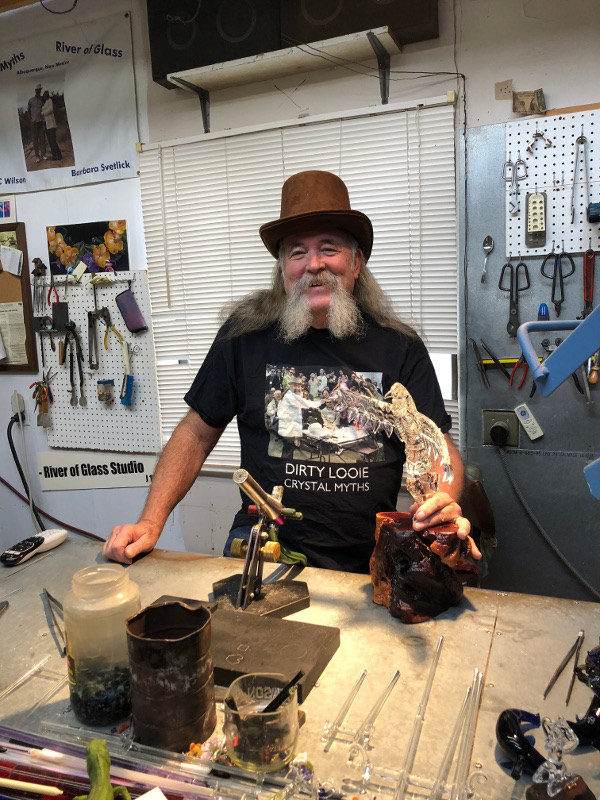 Lewis Wilson is a man of many talents. He’s produced a series of glass arts instructional videos (sold through ABR Imagery), demonstrated lamp working in Japan (for which he learned to speak the native language), promoted the world’s largest hot glass competition, and is a founding member of the International Society of Glass Beadmakers, and a member of the Glass Art Society. Did we mention he’s also a fire-eating-juggler-knife-thrower and black belt in Shotokan karate?

Lewis was born in Roswell, New Mexico in 1949 and started working glass in 1972. He was a medic during the Vietnam war, stationed at Cocoa Beach, Florida. During the slow hours of the night he taught himself about glass through an old scientific glass blowing book he found in the Air Force base library. The medical lab was his studio and a Bunsen burner his torch. There he made intricately woven animal figurines from 4 mm Pyrex stirring rods. 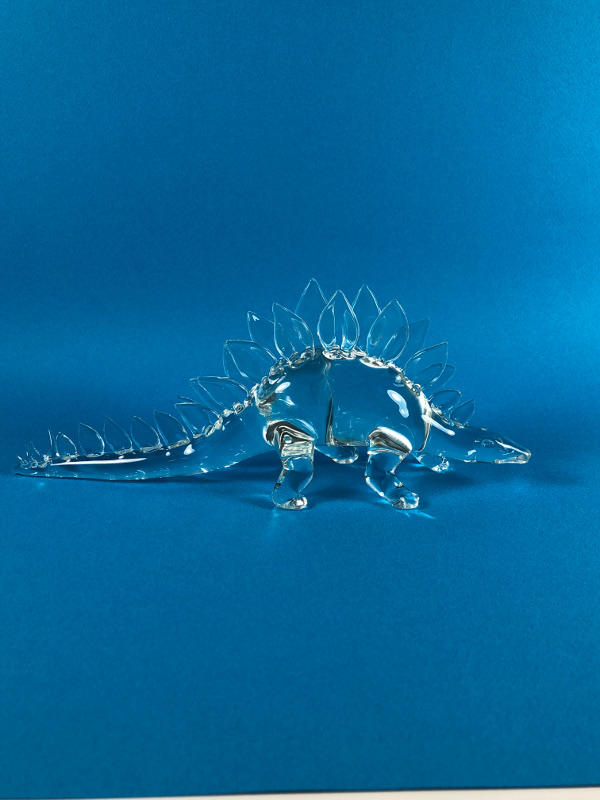 York World’s Fair. Lewis talked them into an apprenticeship at the Crystal Arts on Main Street, U.S.A at Disneyworld where he made thousands of crabs, teapots and birdbaths for the tourists. Mexican glass blower Miguil Bonilla, who also worked for Disney, was another of Lewis’s mentors.

Arriving back in the Land of Enchantment in 1981, Lewis got serious about his work —- establishing his studio, Crystal Mythology, which was shortened to Crystal Myths in order to save money on business cards. “Fifteen years later crystal meth came along and I got all these calls from people thinking I was running a drug lab,” Lewis jokes.

In the Crystal Myths gallery you’ll find everything from goblets and vases to birds and dinosaurs. The fantasy realm is where he draws much of his inspiration.

Being from New Mexico, it is only fitting that Lewis is also known for glass sculptures of Native American ceremonial dancers. The intricately costumed pieces have not only become prized additions to private collections, but also given as official presentations from the state of New Mexico to visiting dignitaries such as King Juan Carlos of Spain, blues legend Bo Diddley, and Presidents George H.W. Bush and Bill Clinton. 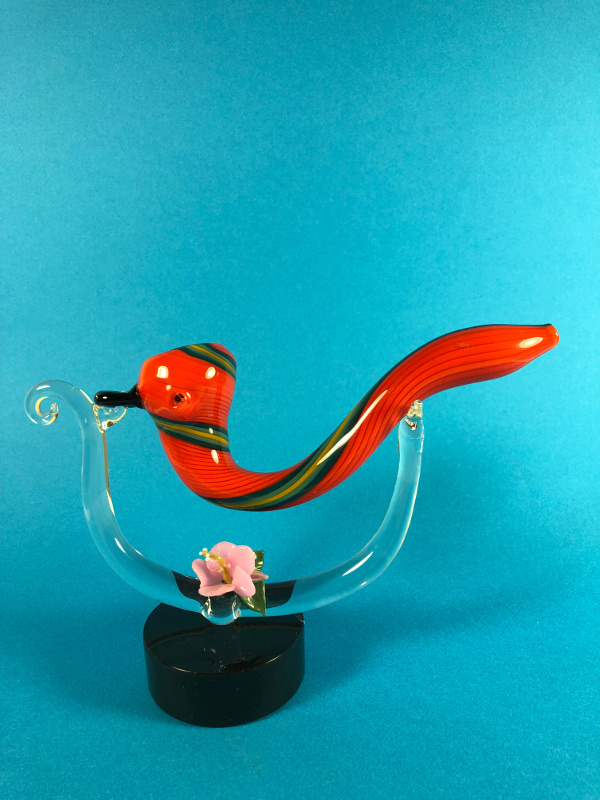 Lewis has also shared his talents with the cannabis community. He’s made everything from small one-hitters to elaborate rigs. He’s collaborated with many well-known pipe makers including Eric Anders, Dan Benway and Jonathan Castillo. Along with showing at Glass Vegas, and serving as a judge for their glass blowing competitions, Lewis has also competed in the CHAMPS Glass Games.

From Lewis’s torch come pipes in the forms of dragons, wizards and scorpions. He also has a production line of illuminati carb cabs topped with tiny sculptures of cartoon characters. Lewis is a character in his own right —- easily recognized by his long hair, bushy mustache and vintage top hat.

If you’ve even watched Lewis work, you’ll realize that “old school” applies to his methods as well as his style.

The biggest benefit of going old school, Lewis says, is that it takes less time to complete each piece than having to stop and weld individual sections. “Prep is for pussy,” he says. That’s why he’s been able to fill his gallery with more than 100 thousand unique pieces and still find time to share his knowledge with the next generation of glass artists.

“I still get a big thrill when I finish each piece,” Lewis says. “I truly love what I do, and I get just as big of a rush teaching other people to do the same.” 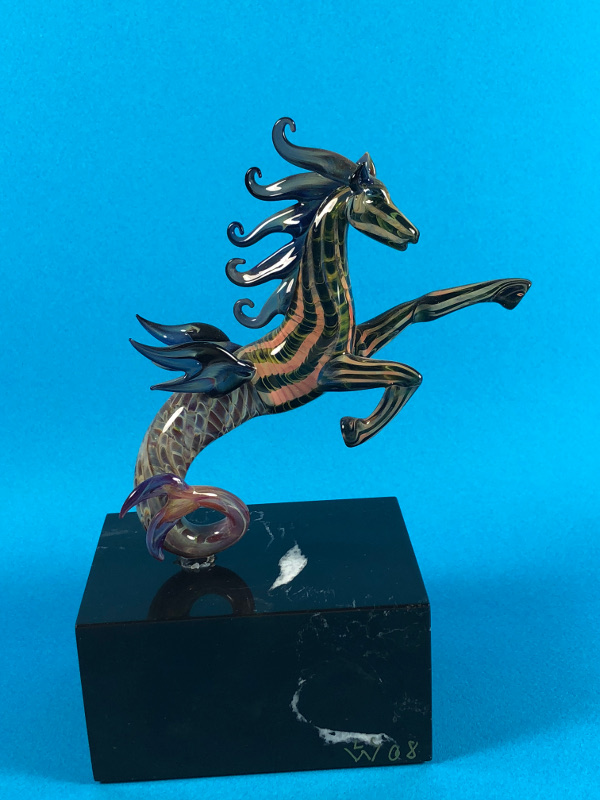 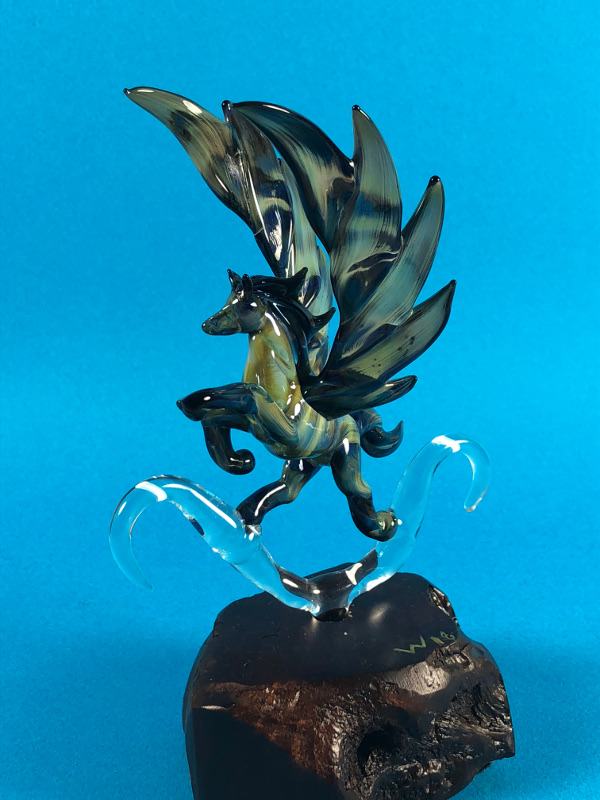