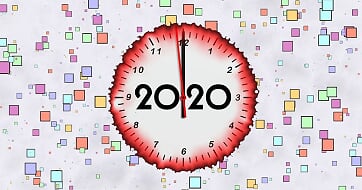 Want to hit a lasting stride of success in 2020? You need to see 20/20. Yes, maintaining a proper vision of the future is crucial to any business in any year, but A) it’s especially crucial now and B) the play on the year is too catchy not to use. Indulge us a little.

As the saying goes, “People don’t plan to fail, they fail to plan.” In an era where technology has accelerated the trend cycle at an exponential rate, the cliché has never rung truer, but the execution of the exhortation within has never proven more difficult. How do you accommodate for the demands of the consuming public when their proclivities seem to shift by the day? How can you continue to navigate the tenuous legalities of the trade when the political landscape has devolved into a maelstrom of poorly-researched memes and pendulum swings? The key is stepping back and getting a wider view. Look at the broad strokes. The minute details are important to consider, but size them up quickly and then fit them into the bigger picture.

To get an idea of the developments to consider for the upcoming year, we tapped into an unofficial consortium of business owners in the space whose continued success has led us to believe that their opinions carry weight. We then merged their thoughts with the collective ideas we’ve gathered through internal research over the years to create this brief series of points worth pondering as 2020 unfolds

Expect a shift in the cartridge market. Including this point would almost seem a contradiction, since one trend in products would typically be considered more of a minute detail than a broad stroke. But considering the massive chunk of revenue coming from the cartridge/battery craze, it’s definitely big picture material.

The outbreak of lung illnesses over the second half of 2019 was a news topic nearly as pervasive as the Ukraine scandal. The situation nearly pulled the rug out from under the e-cigarette market, with careless headlines that linked the outbreak to companies like JUUL popping up everywhere. Now that the dust has begun to settle, however, the facts are seeping through. The real culprit wasn’t e-cigarettes, but rather poorly made and/or tainted marijuana vapes, nearly all of which were purchased on the black market. Being this close to the source, most of us know that vape cartridges acquired through legitimate sources pose little-to-no risk, but the public only reads headlines. Consequently, there’s a good chance we’ll see a downturn in the sale of cartridges, and possibly a shift toward alternatives—other options that provide the convenience of portability, low-odor and discretion. That could mean a return to or upgrade of the wax pens, or it could mean something entirely new.

Get ready for legalization. We’ve said it a million times now; legalization could be in a month or it could be five years, but there’s no doubt that it’s imminent. The tide is now far too strong for remnants of prohibition to hold it back and recent developments lead us to believe that it will be sooner than later. Right at press time, the House Judiciary Committee is bringing the MORE Act to a vote, a bill that would not only remove cannabis from the CSA but would go a step or two further and attempt to right some of the wrongs of prohibition. We’ve seen legalization’s sweeping effects on the industry when it occurs state by state, but rest assured, when it takes place at the federal level, our trade will never be the same. Start preparing now.

Solidify your survival plan. This point ties directly to the previous. Impending legalization will bring corporatization. Soon you won’t be just competing with Joe Blow Smoke Shop down the street; you’ll be the local coffee shop fighting Starbucks—or the grocer facing down the arrival of Walmart. This, plus the rise of digital commerce, will make the reinvention of your space all but imperative. Before sinking more money into advertising, you need to first ensure that you have something worth advertising. And remember—you can’t compete on price. The “dot-coms” of the world don’t have your overhead and the Walmart’s have too much buying power. As an independent business, your livelihood will depend on value and experience. Maximize both of those.

Know your cannabinoids. Notice, we didn’t just say “CBD.” Obviously, that’s the mother of cannabinoid cash cows in the current market, but new developments are on the horizon thanks to new breakthroughs in research. As far as CBD, keep your eye on the USDA’s new regulations. It’s yet to be seen whether they’ll provide clarity or more chaos, but your best bet is to hope for the latter and prepare for the former. Now, about those new developments. Operatives on the forefront of cannabinoid science are now pointing to CBG as the next big thing. You’ve probably heard of it, but there’s a good chance it’s only been in passing. CBG is what is known as a “minor cannabinoid” as it generally only makes up less than one percent of the average cannabis plant. However, new research has demonstrated the compound’s potential in multiple applications, including glaucoma, IBS, Huntington’s disease, colon cancer and bladder function, just to name a few. It has also shown tremendous promise as an antibacterial agent, particularly effective against antibiotic-resistant strains of MRSA. Expect growing demand for this compound and keep your eyes out for its availability. We have it on good authority that foreword-thinking entities in the space are investing in genetics with high expressions of CBG already.