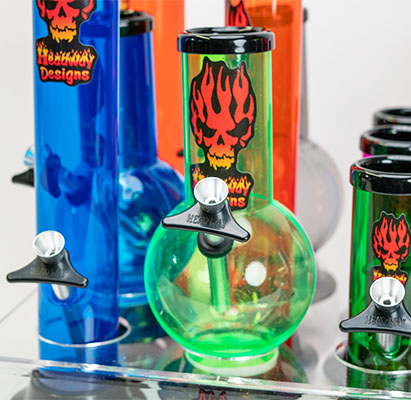 “I never doubted the potential of the product,” says Andrew Tharrington, general manager and junior partner with his grandfather, Bill Slavinsky, of Headway Designs. “But early on there were a few stores who straight up asked, ‘Why should we bother carrying acrylics?’”

No question, even Tharrington agrees, glass bongs are king when it comes to smoking cannabis. Not only are they known for delivering smooth flavor, they are innately beautiful and inventive, in many instances, having been crafted by artistic glass blowers. Unfortunately, for the average smoker, glass bongs can be quite expensive, not to mention fragile, even when made from the highest quality raw materials.

And that, Tharrington points out, is where acrylic pipes, particularly those produced and distributed by Headway, have the advantage.

“The problem with acrylics for the last decade or so is that the vast majority of manufacturers produce really low quality products because of the need to be at such a low price point. Nobody wants to smoke out of crappy plastic, and that’s a big part of why acrylic has such a bad stigma,” Tharrington says.

The material that Headway uses for their tubes is a mix of 60/40 acrylic and polycarbonate, resulting in a sure-durable, shatter-resistant smoking device with an extremely high melting point. Acrylics also come in a wide variety of bright colors and interesting shapes and sizes — Headway is known for their Big Boy series that includes a towering six-foot version claiming to be the tallest in the industry. 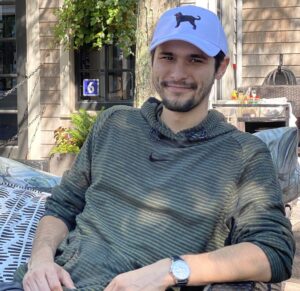 According to Harrington, Headway’s acrylic pieces appeal primarily to two distinct demographics — 18-25 year old smokers looking for a unique piece at an affordable price, and the 45 to 60 year olds who are still into the old school products.

“It’s a great option for somebody on a budget, and for college students, especially, it’s nice to know that because acrylics are so durable, they can smoke with a group of friends and not have to worry about some klutzy person breaking it,” Tharrington says. “Water pipes were originally made out of acrylic, so a lot of people who started smoking back in the eighties and nineties, really like the nostalgic feel.”

Tharrington ventured into the cannabis industry after graduating with a finance degree from the University of New Hampshire. During summer breaks, he’d worked for his neighbor, Bill Garvey, owner of East Coast Acrylics, one of the original manufacturers of acrylic pipes. Knowing in his mind that the business could be more successful with better management, marketing, and product development, Tharrington jumped at the chance to become its new proprietor when it was offered.

“I made a lot of changes to the basic product after we took over. The former owner was importing materials from China as many manufacturers do, but costs were high. I took advantage of my grandfather’s overseas connections, and 50% stake in a factory, to have the parts produced in-house and then we make everything by hand at our headquarters in Pepperell, Massachusetts,” Tharrington says. “Not only did that make our pipes higher quality, but we could also pass the cost savings on to our retail customers so that they could have a larger profit margin.”

Headway’s most expensive piece retails for $79.95 whereas a simple glass piece can be double that amount. “They’re an all-around better bang for your buck,” Tharrington says.

Until recently, Headway bubblers came standard with an old school aluminum downstem and bowl. The brand is about to launch a new line of high-end acrylics outfitted with either a glass downstem and bowl or a silicone downstem with a glass bowl. A common issue with low-end acrylic pieces, Tharrington explains, is that the plastic cap plug between the tube and the base is rarely a perfect fit resulting in leakage. Headway solved that problem by building their acrylic pipes with a silicone cap plug that creates an air-tight seal.

Headway offers acrylic pipes in a variety of styles and sizes as well as custom acrylic displays for easy merchandising in the stores. The 6-inch Traveler, available as either a straight or bent tube, featuring a built-in metal bowl, is one of their most popular pieces retailing for about $10. The Solo series, attention-grabbing straight tubes that range in size from 3 to6 feet tall, are the most talked about for sure. There are also specialty versions with ice catchers, multiple chambers, two separate bowls and downstems, brass knuckle style handles, and even hookah styles with hoses for sharing. 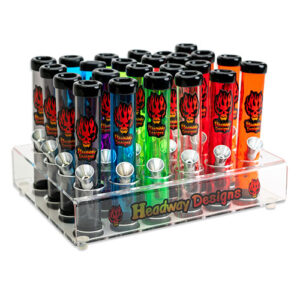 Prior to new ownership, the company was selling between 250 and 500 individual pieces per year. This year alone, Headway has sold more than 500 of its 24-count displays.

The tipping point when Tharrington realized Headway was here to stay, came when he was exhibiting at a recent Smoke Shop Events (SSE) trade show.

“SSE gave me the opportunity to have the undivided attention of some big distributors and retail chains so I could educate them on the advantages of our acrylics and working with our brand,” Tharrington says. “The response was overwhelming — I came home extremely happy and a little worried about how we were going to fulfill all the orders. Luckily, I had friends who put in 60-70 hour weeks for a month and a half to get everything done. Now, we have a six-person production team, so we can handle any order that comes in quickly and efficiently.”

Now that Headway has established itself as a leading vendor of acrylic pipes, they’re dipping their toes into the glass and silicone categories. Being able to manufacture these new pieces in their own facility means they have the ability to produce high quality products at lower price points than most importers.

“We’re definitely leveraging our ability to source new products and now have a broader appeal with retailers,” Harrington says. “If a store is already buying acrylic from us, odds are we can get them to try out a few pieces of glass and silicone; we also have a pretty decent sized line of metal pipes and dab wands, as well as impulse buy type products such roach clips, jewelry, and beer pong games.”

“The catalog (from the manufacturer) is over a hundred pages, and I spent weeks whittling it down to the most unique products that not everyone is going to have,” Harrington adds.

That uniqueness, whether in the form of acrylics, glass, silicone or novelties, is what Harrington likes best about the product categories represented by Headway. “It really gives us a greater chance to stand out since there are not a lot of companies that offer the same things we do,” he says.

“My favorite part about this industry is that the ‘suits’ haven’t taken it over yet,” he adds. “The smoke shop industry, including vendors and retailers, is primarily driven by small businesses, and I feel like you are able to create a greater personal connection with customers in this industry compared to others.”