Marijuana Sales at an All-Time High 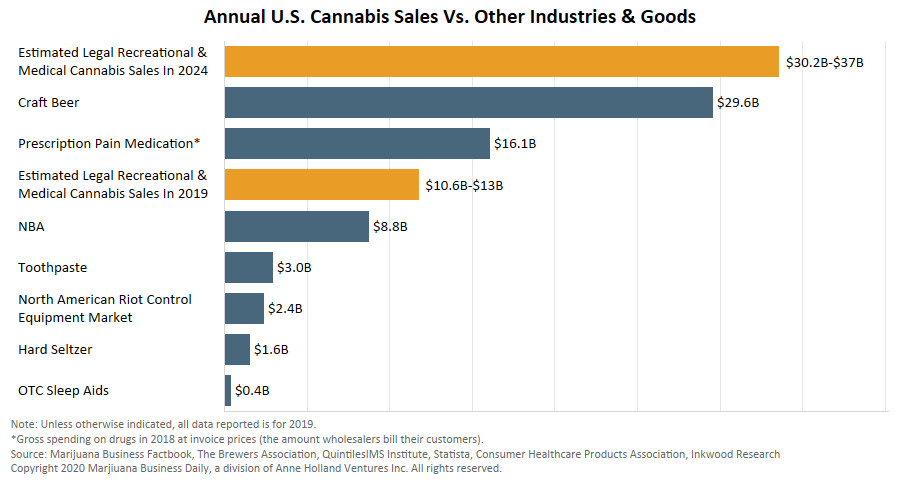 With revenue of $10.6 billion-$13 billion in 2019, sales of legal adult-use and medical marijuana in the United States topped spending on sleep aids, hard seltzer and toothpaste combined.

The data – published in the 2020 edition of the Marijuana Business Factbook – underscores the fact that the U.S. cannabis industry is already a major economic force, even though it has yet to reach its full potential.

Sharp sales increases in new medical marijuana programs as well as continued gains in recreational markets are expected to fuel much of the industry’s growth over the coming years.

Recently launched MMJ markets – including Florida, Maryland, Oklahoma and Pennsylvania – are booming and, thus, more than offsetting lost medical sales in markets that have legalized adult-use sales, such as Illinois, Massachusetts and Michigan.

MMJ sales in Florida and Oklahoma are expected to surpass $1 billion each by 2021, placing them among the most valuable and rapidly growing cannabis markets in the United States – medical or recreational.

On the adult-use side, sales in mature markets remain robust, while revenue in newly legalized states such as Illinois and Michigan is expected to grow quickly.

But conditions are expected to improve in the coming years as businesses adapt to the state’s unique regulatory environment and more municipalities allow recreational businesses to operate in their jurisdictions.

Further growth will come as more states legalize adult-use cannabis. Arizona and New Jersey could be the next to do so, with residents in both states set to vote on recreational ballot initiatives in November.