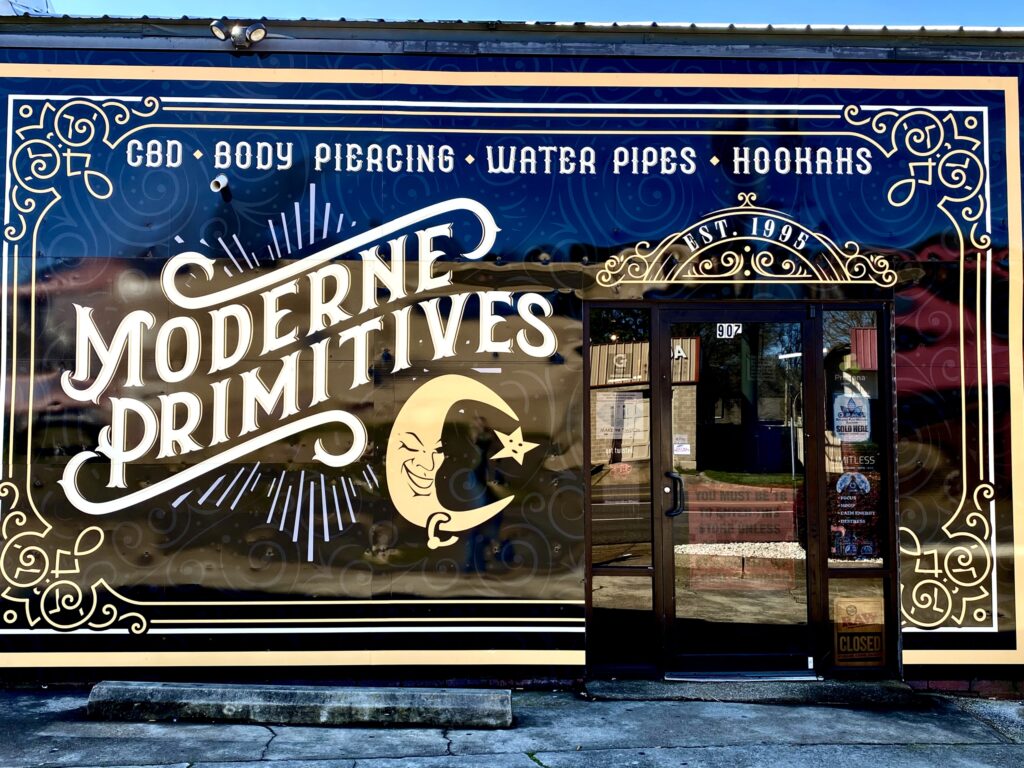 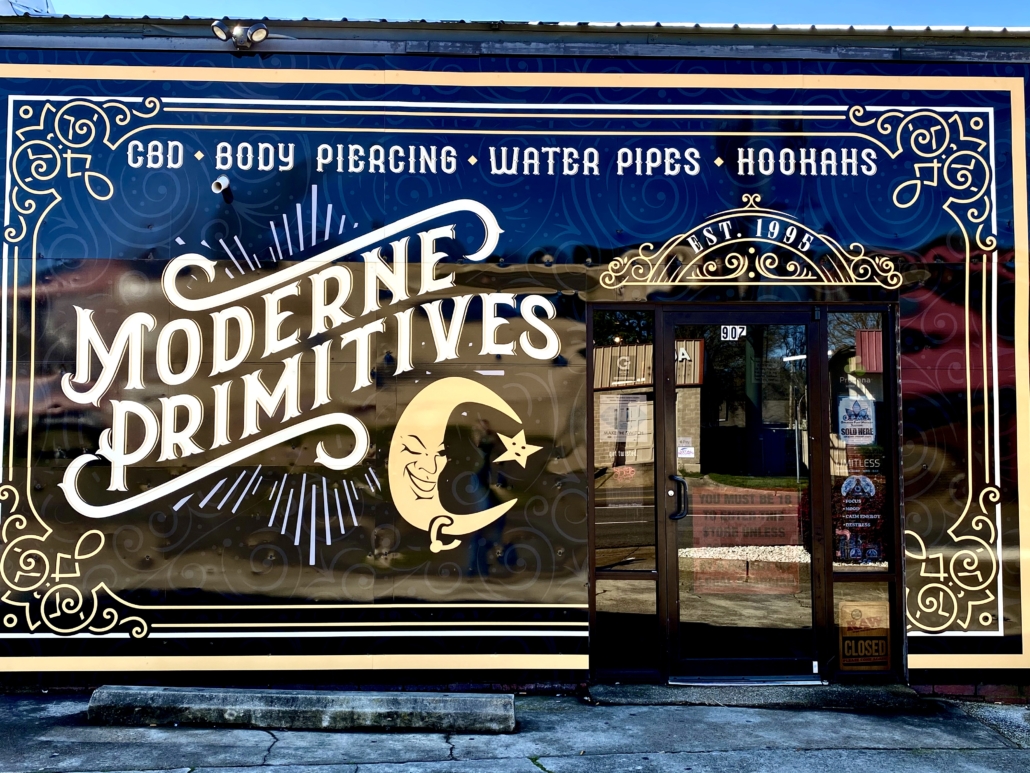 “I just want to encourage everybody everywhere to support small, local businesses . . . they’re the heartbeat of America. Retail is tough now, man.” 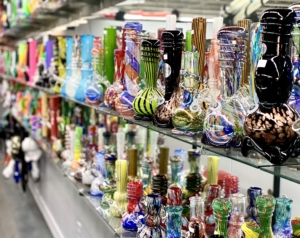 When Sandy Spades says this, she’s not trying to appeal to local shoppers to give Moderne Primitives a leg up on the box stores and dotcoms. She understands where her words will be printed. It’s a statement of solidarity; if you want the support of your community, support your community. It’s the Parable of the Sewer, the Golden Rule and the concept of Karma all rolled into one and tailored to apply specifically to local, niche businesses.

Simply put, those words are for you more than they are for her. Moderne Primitives, the counter-cultural staple of Texarkana, Texas she opened 25 years ago is doing just fine, thanks. Truthfully, “fine” is an understatement.

“We’re having the best year ever,” she says confidently. “It’s just really, really good right now. I’ve been very blessed. Very, very blessed.” Her words ooze with gratitude, the cross hairs of which are resting directly over both her staff and her customers, both of whom she refers to as family. 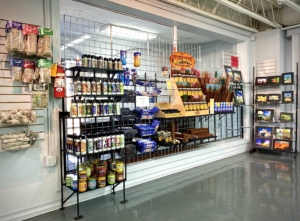 “There are two things that make a successful retail business,” she offers. “One thing is full shelves. Let’s say you have two apples carts, and the apples in both are identical in every way, but one cart is full, and one cart is half-empty. People are going to pick from the full cart every single time.” 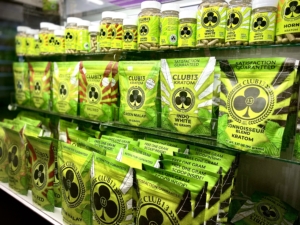 Sandy’s cart, if you will, is most definitely full, with a value well into the six-figure range. Of course, that includes the hardware—glass pipes, silicone pipes, wood pipes, metal pipes, acrylic pipes, bubbler, chubblers, tubes, beakers, vaporizers—the whole nine and then some. But she also has an herbal wellness section that will blow your mind. That is, if it doesn’t soothe it first.

“We carry CBD, kratom and a couple of nootropics like Lion’s Mane, etc.” she elaborates. “For our CBD selection, we have separate cases. One case is CBD isolate and broad spectrum only, one case is full spectrum only and another case that’s hemp flower only.” The idea is basically to have something that fits the needs of each customer. 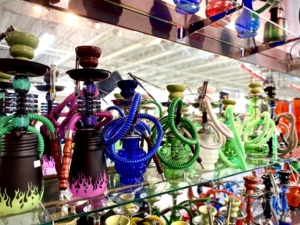 “When someone asks for CBD,” she explains, “the first thing I do is ask them if they get drug tested at work. If they say no, I recommend full spectrum and explain the entourage effect. For people who do get tested, we have the broad spectrum and the isolate—no THC present.

“The problem now,” she adds, “Is because some companies’ products have less than the allowable amount of THC, they’ll put ‘No THC’ on the label even though there are trace amounts . . . that’s going to cause problems for someone who is drug tested.’ 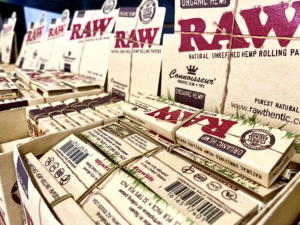 The second thing, according to Sandy, is “having good people.” If her constant nod to her staff throughout the conversation is any indication, she has no shortage there. “Even if your stuff costs a little more than the guy down the street,” she says, “if you have good people, the customers will come back every time because they’re comfortable. People are going to go where they’re comfortable.”

25 years of success based on service and selection is impressive enough. But the narrative takes on another dimension of consequence when you consider the humble beginnings.  Founded in 1995 as basically an offshoot of Sandy’s tatoo parlor, Dermagraphics Studio, Moderne Primitives was originally a piercing studio and new age gift shop with not one pipe in their selection, nor any intention to add any. Ultimately, though, she followed the demand of her customers. 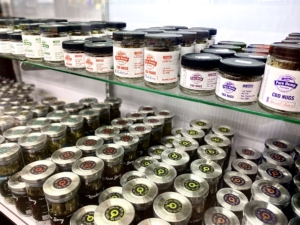 “People started asking for pipes,” she recalls, “so we started selling them. At that time, Texas paraphernalia laws were tough . . . but we read up on the laws, toed the line and did what we had to do to make it legitimate . . . Eventually, the metaphysical stuff fell by the wayside and the shop just kind of turned into what it is now.”

The best part of the story, though, is how they tracked down vendors. Keep in mind, this was 1995. “There was no internet,” Sandy reminds us. “I mean there was, but not like now. You couldn’t just go online and Google ‘smoking accessories.’ We finally figured out how to do it, though,” a coy smile frames her words as she continues. “We went to a neighboring city and snooped around through where the head shops there were throwing away their boxes and took the labels off so we could contact the companies and get some pipes.” 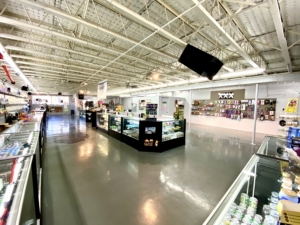 Luckily, 25 years later, success no longer requires picking through trash. For Sandy, it’s simply a matter of sticking to her time-tested recipe of service and selection while keeping her finger on the pulse of where the market is going. She isn’t denial of the effect that companies like Amazon are having on local retail, but she’s confident that she can sustain within her niche, nonetheless.

“The products we carry,” she says, “people want to touch them. They want to look at them, hold them and examine them up close. They can’t do that on Amazon.”