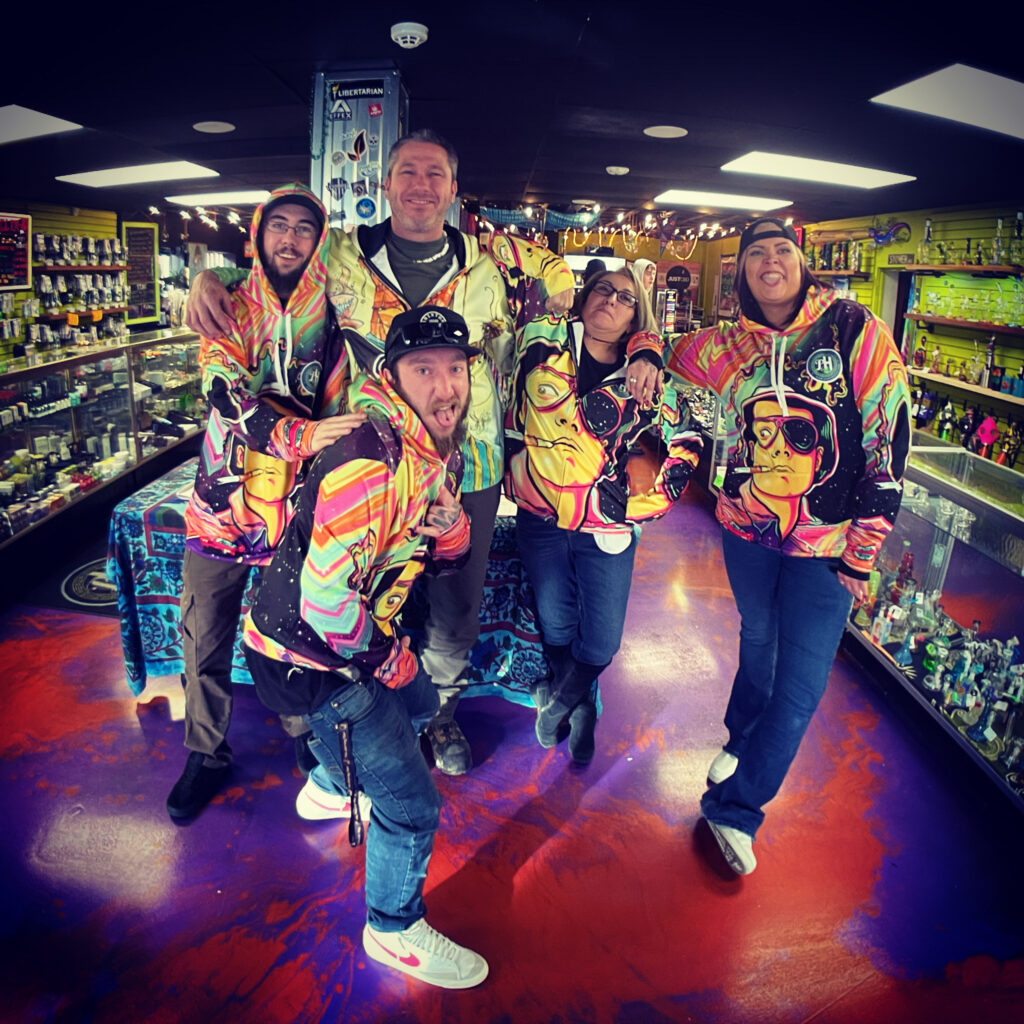 Every smoke shop has an “origin story,” and though many are similar, Platt HempCo does not fall into that category. How often do you hear of a former professional soldier who joins his wife, a graphic artist, to open a smoke shop in a small town of less than 10,000 people? In Wyoming. And neither of them had any business experience,

The Watts’ opened their doors to shop number one in Dec 2018. She and hubby, Sam, were former smokers and there was no vape shop within two hours of where they lived, tiny Rawlins, Wy., the proverbial “one-horse town.”

“Opening our first shop was a huge risk by our standards,” Sam confessed, “and we put in all the cash we had at that time, which was $3,000.”

“We lived on peanut butter sandwiches for a long time,” Alicia added with a laugh.

“That money bought crappy display cases (which they had to redo) and we put them in our tiny basement even before we signed a lease. We got a lot more square footage than we needed, about 3500, but we paid just $600. It was embarrassing for the first few months because we had this huge warehouse with just two tiny cases in it. As small as the town was, we catch about 1000 cars per day passing by from the interstate,” Sam said.

Of the hundreds of shops I have spoken with or interviewed since 2013, that is about the least amount of money that anyone used to open a shop of any kind.

“Before we opened our doors we spent a lot of time in neighboring Colorado since they had a lot more shops to look at. In our whole state of Wyoming there were about six at the time,” Sam said, “and that’s in a state with less than 600,000 people.”

“The first day I did $16.47 in sales and I was ecstatic,” Alicia recalled. “Most of the town knew us and were supportive from the beginning.”

Sam was candid in sharing his experience since adding hemp and cannabis products could be viewed poorly by conservative military people.

“One thing they teach us in the service is that we can’t have any feelings. So I didn’t know or care how others might view us. After six tours in Afghanistan and almost 14 years in the service, that was all I knew. I saw a lot of bad shit and it kind of fucked me up. When Alicia recommended CBD to help my post-traumatic stress it made a huge difference, so I didn’t care what anyone said about it.”

“But I fought it,” Sam continued. “Like everyone I thought it was marijuana and all I saw was jail time and prison.”

After his military career ended Sam worked as a dam operator on the Platte River, which is where they took their name.

A move to Casper, slightly larger with 60,000 people, prompted store number two. Those cities are two hours away and Sam’s job was in the middle, so the logistics worked as they installed a manager at their first location. But their new shop was focused on CBD and hemp and “it just blew up,” Sam said. Shop number three in Gillette completed the triangle, with number four pending.

“We were in their faces,” Alicia recalled. “We had huge cannabis leaves plastered all over the front of the shop, and it pissed some people off, but it turned more people on. Our best month in our hemp shop was almost $200,000 in a town of about 60,000 people.”

And that is why Platte HempCo is our Shop of the Month.