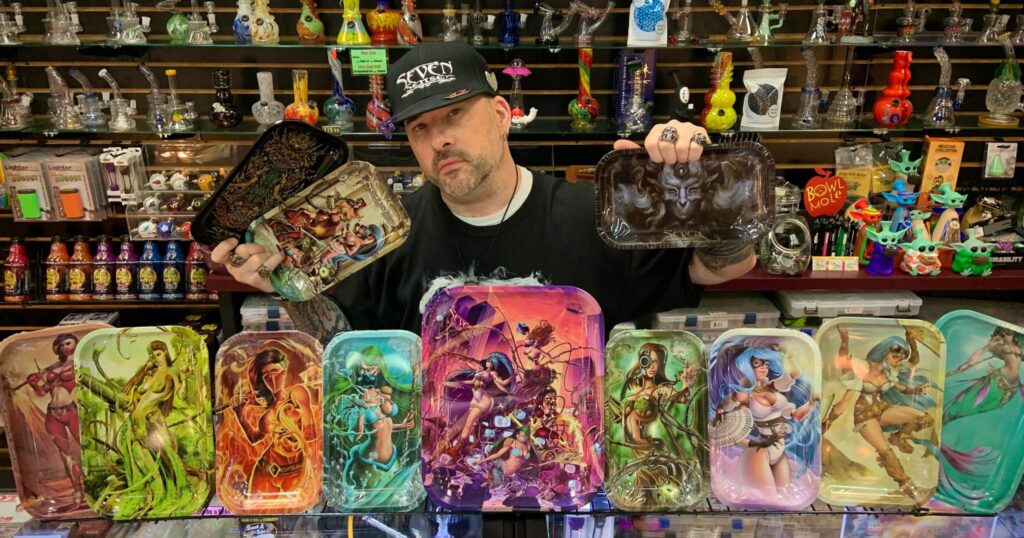 “What floats my boat is creating quality, original products and building a brand name that people can trust,” says Privett, who started Seven Sense as a smoke shop in his hometown of Columbia, South Carolina, and expanded the brand into a wholesale operation. “It’s really neat to have an idea, to bring it to life and to have people appreciate it.”

Prior to Seven Sense, Privett was a corporate account manager for Kinkos and FedEx, and was also part of the local music scene. Back in 2003, he was just looking to make some “weed money” when he took $120 worth of incense to the local flea market. He earned a rep for fair prices and great customer service. Business was good, and as you might expect, it wasn’t long before incense customers were asking for smoking accessories. Little by little, he added those to the mix. 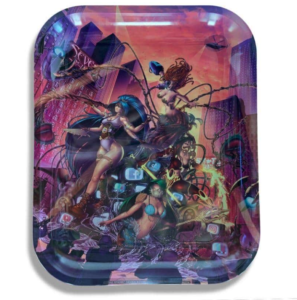 After 16 years as a vendor at the market, Privett tired of the 45 minute drive only to find that a younger generation of customers were going more and more online to shop. Rather than fold up his table for good, he opened a brick and mortar store near to where he lived. His regulars followed him to the new spot and Seven Sense became a household name — at least locally. Expansion seemed like the next logical move. But instead of opening a second store, Privett chose to take his Seven Sense brand “International” and share some of the products, that until then had been exclusive to his store, to other smoke shops around the country.

The Quadrasesery artwork on Seven Sense rolling trays represent some of the founding principles of the brand, such as artistry, generosity, honesty, strength, and the ability to adapt to ensure survival. The fantasy goddess illustrations are created exclusively for Seven Sense by international artists in places like Australia, Brazil, Greece, Indonesia, Korea, the Philippines, Russia, and Vietnam.

“We’re outside of the box with the whole art thing. There are a lot of rolling trays with cartoon characters on them, but we want ours to be different and original. It’s also our way of supporting the international artistic community,” Privett says. 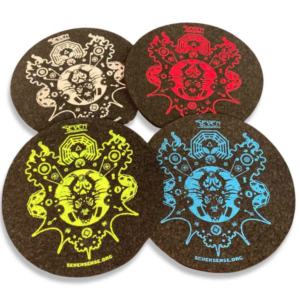 And then there’s soap –– a common product that Privett admits never giving much consideration.

“But the more I thought about it, I realized that for every man, woman, and child, a bath or shower is an important part of their day,” Privett says. “Kids might hate bathtime, but most people find it to be like a meditative experience –- if that time is so personal, surely you want to use a premium bar of soap rather than some crap from Dollar Store.”

Seven Sense Private Reserve Natural Artisan Soap is handmade in Ohio and North Carolina with good-for-you ingredients including organic shea butter and olive, soybean, coconut, and sunflower oils. A traditional cold-process soap-making technique helps retain the natural goodness of each ingredient. These soaps are great for deep cleansing and also help protect and moisturize the skin. Each 3.4 ounce bar features a pleasantly delicate fragrance such as sandalwood, amaretto, mocoachino, honeysuckle, and blueberry pie (come on, who doesn’t want to smell like blueberry pie?). Especially appealing to the alternative crowd are limited editions like Hamster Cage (extra grit and the smell of fresh cut cedar), and It’s About Damn Lime (a refreshing scent that is tart, airy, and zesty). The packaging is as attention grabbing as the scents; The Monster, for example, features Frankenstein, and is claimed to smell appropriately like “stitches, electricity, metal, and reanimation,” while the bloody logo of Lost on the 13th hints at a smell like “spooky a** woods, campfires, and bad decisions.”

Mainly because of the natural ingredients, handmade soap doesn’t last as long as traditional store brands like Zest and Irish Spring. In general, a five ounce bar will last between 3-4 weeks with daily use. Privett says that makes it something that people will return for on a regular basis. And, he adds, natural soap, unlike some products on smoke shop shelves, is never going to be banned or fodder for controversy.

Rolling trays and soap might not seem like it would have the power to impact sales, but Privett says that in his experience as a retailer, giving customers choices and showcasing unconventional products creates an organic buzz and sets a shop apart from the competition.

“There are a lot of products out there,” Privett says, “and that’s where it benefits the retailer and their staff to tell their customers about new things that they might want to try out.”

“I’ve had a lot of jobs in different places from restaurants to consulting firms, but I love being part of the smoke shop community –- maybe it’s because I’ve always appreciated being an underdog,” he continues. “I enjoy being on the inside of things and helping to make a positive impact. When I’m talking with a retailer about carrying Seven Sense International products, I’m excited for their customers to come in and say, ‘Wow, this is cool! I’ve never seen anything like this before!’”