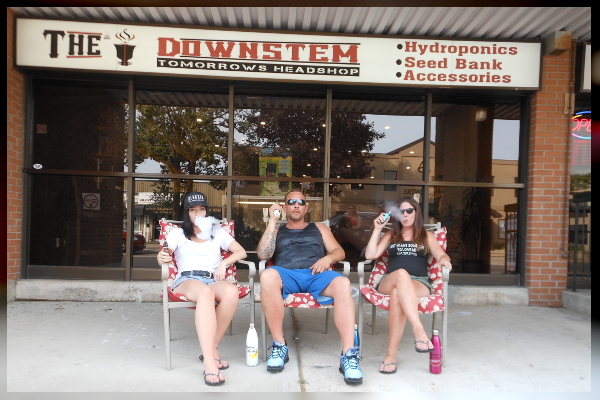 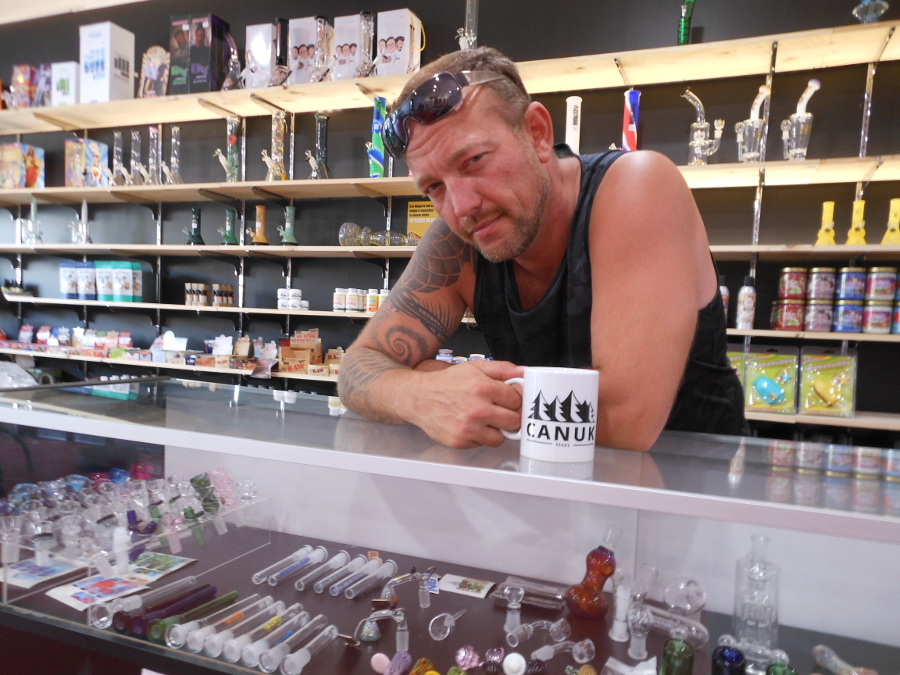 “When you have a man like Jeff Sessions stand at a podium in front of people AND cameras and literally say out loud that ‘good people don’t smoke marijuana,’ . . . all I hear is ‘my family owned slaves.’ Seriously. And that’s who runs your government in the back room. Men like Sessions.”

This isn’t the way you’d expect the conversation to go. Our neighbors to the north are supposed to be meticulously mild-mannered, agreeable almost to a fault—if you buy into stereotypes, anyway.

“Canadians are very passive fucking fence-sitters. We don’t want to ruffle anybody’s feathers.” Well, apparently Terry buys it, but he’s not exactly embracing it. Don’t get the wrong idea; he’s incredibly personable. But there’s this fire within him that 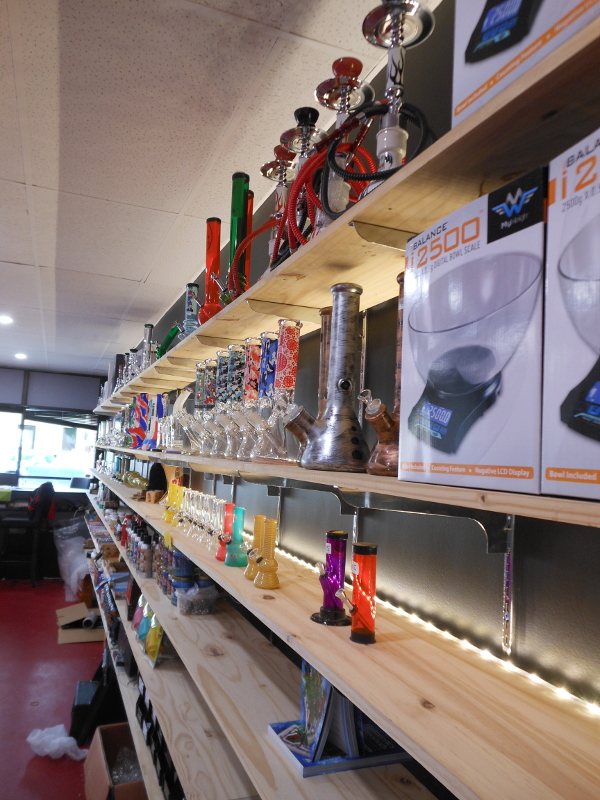 seems to burn away the soft edges his fellow citizens possess—and the Canadian winter isn’t going to be snuffing it out anytime soon.

The conversation wasn’t intended to slide straight into the rocky terrain of political theater, but sometimes a digression is healthy. It’s good to know how people perceive us from the outside. And Terry’s not just rattling off mindless left-of-center catechisms. He’s paying close attention.

“I watch more American politics than I do Canadian,” he qualifies, “just because it’s easy for me to dictate what happens here. It’s almost fucking scripted. Your shit is like a reality show . . .”

We’re sitting in patio chairs outside his two businesses, Viscous Vapors and The Downstem. They’re side-by-side on the main drag of Brockville, Ontario, a small, but unforgettable town on the St. Lawrence River halfway between Montreal and Toronto, part burgeoning tourist destination and part sleepy retirement community. If we crane our necks, we can see the edge of upstate New York. 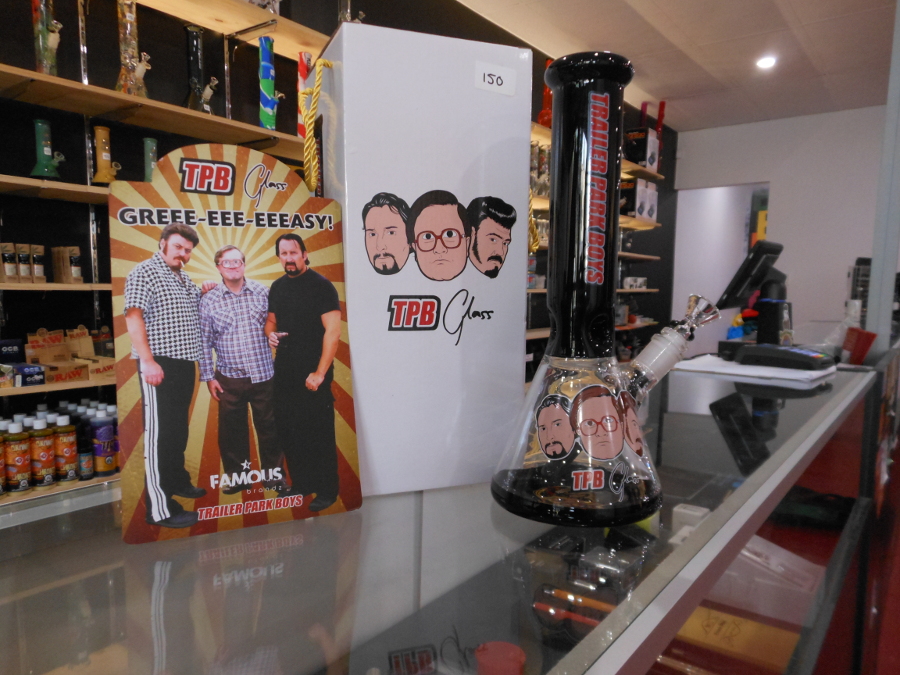 As we sit there, attempting to discuss business, but continually slipping back into geo-socio-political rants (Did you know that Canadians make it a point to wear their flag when travelling abroad to avoid being mistaken as Americans?), Terry’s customers file past. He greets each of them warmly, most of them by name, all of them with a welcoming smile. The interruptions prove useful. For while our short attention spans hamper my mission in collecting useful information, these interactions fill in the gap handily. I can witness his business model playing out.

These customers aren’t the rank and file fringe factory miscreants so often associated with the trade. They’re regular, every day people; young and old.

“We want to be an adequate place for somebody to go like my mom or my grandmother who could go to the doctor tomorrow and end up with a marijuana script,” he remarks. “We want to be a place that’s comfortable for them. That’s not the business model that’s been around since the 70s, you know, that tie-dye, Bob Marley, weed leaf, dread locks, patchouli oil, but that business model’s dying.” 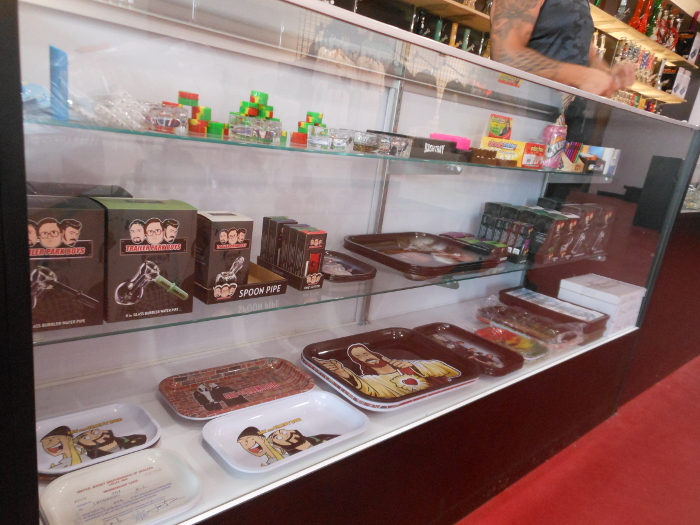 The other aspect I notice is the trust his customers have in him. He’s their source; their authority on anything and everything related to combustion and inhalation. You can almost hear his mind spinning with the continual processing and storage of new data, which he readily access to empower his customers and ensure their loyalty. He’s a walking encyclopedia of vape units, a wellspring of knowledge on their health effects (real and fabricated), a scholar of alternative medicine, a would-be padawan to Ed Rosenthal’s Jedi.

“I’m not your average product peddler,” he offers. “I sell myself as well. I sell an idea. I sell a feeling. When you leave here, you feel secure and safe with your purchase. You feel like you are educated on it . . . It’s empowering to have the intellectual ability to defend your choices. But it’s also important. If you don’t, you’re just a fucking lemming.” 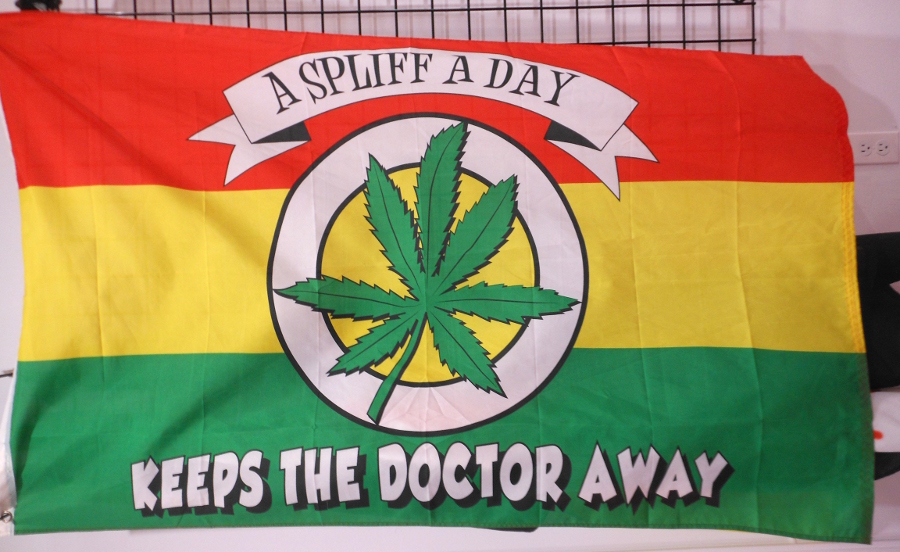 As of now, The Downstem is a standard head shop with a grow section still in the process of being fleshed out, but Terry has massive plans. Soon, he’ll have a custom T-shirt service in the front of the store, a sure hit for the tourists rolling through town. For the locals, he’s planning an eventual medical cannabis licensing center (isn’t Canada wonderful?), which will empower his customers to grow far more than the 4 plants allowed under the new legalization bill. The fledgling grow section in the back will soon be a full hydroponics gardening center. He’s also considering a testing center, and even toying with becoming a full-on dispensary if Ontario’s new Conservative government keeps their promise to privatize the marketplace. 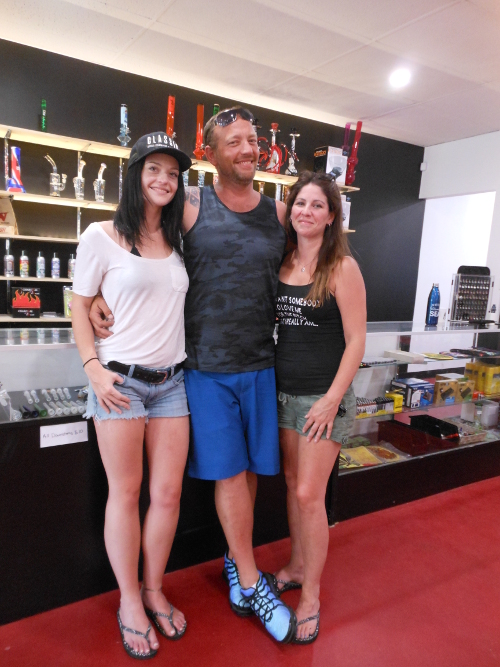 To keep the dream alive, he works nonstop, as do Kate and Jackie, his two loyal employees. “We work seven days a week. No time off. There are no Sundays . . . Those two girls work their asses off killing themselves for the business on the daily. . . without them, there would be no me.”

He’s confident in the future, though, having learned through experience that patience is indeed a virtue. “Once I learned that things are better when they happen organically, that’s when I really started to sustain. I used to force everything. Just force it. It never worked . . . Now, I just put in the time and the hustle and let it happen.”

Though Canada’s new legislation officially sanctions the sale of cannabis accessories, that new legal status won’t go in effect until October 17, 2018. As of now, The Downstem and shops like it operate under a legal paradigm very similar to what we have in much of the U.S. However, unlike that of the U.S., Canadian law enforcement has been very, shall we say, selective in the laws they prioritize, with those governing paraphernalia languishing at the very bottom of the list. The result has been a quasi-legal status that has empowered the nation’s shops to all but fully embrace cannabis, with many of them selling seeds right out in the open. It takes getting used to.