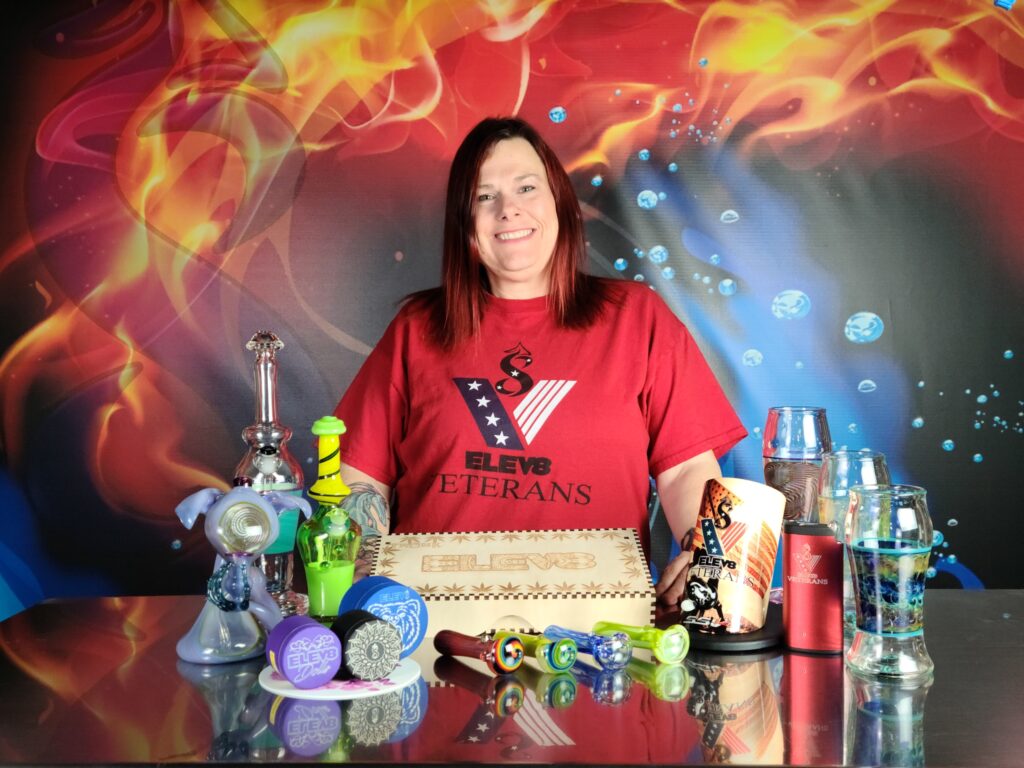 Theresa Dvorak had plans to be a “bad ass” in the military. Straight out of high school, she joined the Army and was assigned to 82nd Airborne Division, 82nd Signal Battalion, where she was one of 800 women among 16,000 soldiers in the unit.

Dvorak’s very first deployment was Operation Uphold Democracy in Haiti. She was issued an M-60 machine gun and top-secret security clearance, but luckily, even though she was excited to make her first official jump as a paratrooper, the mission was diverted before reaching its target. When the crisis cleared, Dvorak was situated in the battalion security office where her training, dedication and lightning-fast typing skills earned her special recognition. She moved quickly up the ranks, working with the Department of Defense and an International Weapons Inspection agency.

Dvorak was discharged in 2003 after the Initial Insertion into Iraq. Like many military veterans, Dvorak suffered from post-traumatic stress disorder (PTSD). To add to her ills, she was diagnosed with three types of cancer and needed immediate surgery to live. Doctors at the VA prescribed her four pages of medications, including daily doses of Klonopin, a tranquilizer used to treat anxiety attacks. By the time Dvorak was forty, her liver was failing, and she was given only a few years to live without a transplant. She immediately began seeking out alternative treatments such as cannabis. The VA said, absolutely not!

“If you try to come off your prescribed medications and treat yourself, you’re seen as a harm to yourself,” Dvorak says. “I’m still not able to discuss it with my doctors for fear of losing my medical benefits.”

“The sad situation is there are patients that still need their prescribed medications plus cannabis, which helps with some things, but not all,” she adds.

Sicker than ever, and fighting an opioid addiction, Dvorak moved from Fayetteville, North Carolina to 420-friendly Colorado. It was there that she befriended Steve Kelnhofer, inventor of the Silver Surfer stationary vaporizer. The benefit, to people like Dvorak, who is allergic to metal, is this is that the Silver Surfer features a full ceramic heating element and glass on glass airflow which eliminates the possibility of harmful toxins and metals often emitted by inexpensive vape cartridges.

Dvorak went on to become the lead salesperson for Kelnhofer’s company, Elev8 Distribution, and launched a new mission as the founder of Elev8 Veterans (elev8veterans.com), a non-profit focused on educating veterans and their families about cannabis consumption and bringing an end to opioid addiction.

“My goal is to help others recognize they can heal without harmful treatments and prescriptions,” Dvorak says. “We fought to live during our time in the service, so we need to continue to fight after our release.”

The objective at Elev8 Veterans goes beyond simply being an advocate for the medicinal use of cannabis. They also provide free glass blowing classes, which not only teach vets a skill, but gives them a therapeutic hobby that some have turned into money making ventures. Dvorak also partners with local veteran organizations, such as Twenty22many, ​that encourage safe reliable access to medical cannabis. She also travels the country, sharing her story and helping to destigmatize the use of cannabis that military and VA have deemed off limits.

To help fund the efforts of Elev8 Veterans, Dvorak collabs with independent glass artists, who donate pipes to be sold at auction, and works directly with smoke shops and dispensaries stage fundraisers and educate local veterans on alternative therapies.

“I’ve fallen in love with the cannabis culture,” says Dvorak, now cancer-free and on just one med to help keep her diseases in remission. “Everybody is an advocate in their own way. Smoke shop owners, distributors, and growers that have been fighting all these years so that I could come home to have cannabis as a veteran, deserve my service for making sure that I was able to heal.”

And Dvorak’s reward for her continued service to her brothers and sisters in arms?

“I’m a world changer,” she says proudly, “I get to see people choose life — that’s what it’s all about.”